The Corvette is a high-performance sports car manufactured by Chevrolet. It has been in production for more than 60 years, with eight design generations. The first model was introduced in 1953. The car has been manufactured in Bowling Green, Kentucky, for the past 30 years.

The Corvette is one of two sports cars in the automaker’s lineup. It is priced above the Chevrolet Camaro. The Corvette’s competitors include the Audi R8, Dodge Challenger, Ford Mustang, Porsche 911, and Toyota Supra.

The Coolest Hidden Designs of the C8 Corvette

You Can Actually Tow Stuff With Your Chevy Corvette

A C5 Corvette Is a Great Budget Race Car

Read the latest articles about the Chevrolet Corvette:

This Custom Corvette Wagon Can Be Yours for $20,000

Everything Needed for a C6 Corvette to Go Off-Road

Corvette Fans Will ‘Feel Right at Home’ in the Karma GS-6, but SUV Drivers Will Hate It

Watch: Plan On Stealing a C8 Corvette? Don’t Do It Like This

What Not To Do With Your New C8 Corvette

The Best 80s Concept Cars That Were Never Made

The Best Used Sports Cars for Summer According to TrueCar

Lots of Changes For the 2022 Corvette: What We Know So Far 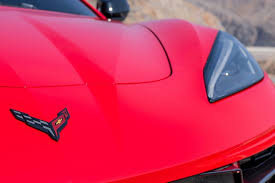 2 New Corvettes Stolen From the Same Owner in 3 Months

The 3 Worst Chevy Corvette C8 Modifications You Can Make

Can a Tall Person Drive a Corvette?

Luxury Cars Are Flying off Dealership Lots in 2021

Dunham Corvorado: The Most Outlandish Cars Ever Made

Supercar Of Your Dreams Or Just A C6 Corvette Body Kit?

How Many Miles Will a Chevy Corvette Last?

Will the Chevrolet Price Increase Impact Sales of the C8 Corvette?