While the Kia EV6 is already here, Kia does have plans to bring a larger electric SUV to the United States. The Kia EV9 is expected to arrive at some point in 2023, and it will give folks the option to get an EV with three rows of seating. But there’s actually something more exciting about this three-row SUV, it could offer level 3 autonomous driving.

What is level 3 autonomous driving?

A level 3 driver assist feature allows you to engage in various activities while your SUV drives. It is known as conditional driving automation, so it does not mean that a car is self-driving. Kia has stated that it has the technology to give level 3 driving to the EV9 SUV. But, it’s still unclear if the United States will get that feature when it first goes on sale.

According to Interesting Engineering, Mercedes-Benz is the first car manufacturer to get level 3 driving approved in the States. Unfortunately, Kia’s system is not quite there yet. By the time the EV9 SUV does arrive, that could change.

The Kia EV9 will be bigger than the EV6

In terms of size, the Kia EV9 will be bigger than the EV6. The EV6 is an electric SUV with two rows of seating, and the EV9 will have three. On top of that, the EV9 looks like a boxy SUV. Thanks to that design and the platform that this EV rides on, the interior is going to be spacious.

If you have been waiting for an EV that can handle family life, the Kia EV9 could certainly be it. You can essentially view this vehicle as the electric version of the Kia Telluride. With an estimated range of about 300 miles, it will also be practical enough for daily use.

When will the EV9 go on sale?

According to Motor1, the Kia EV9 should be coming during the first half of 2023. Its MSRP will likely be around $50,000, which will make it cheaper than other three-row electric SUVs that are currently on the market.

The Hyundai Motor Group has said that Kia will have seven fully-electric vehicles by 2027. The first of those is the EV6, and the EV9 will be the second arrival. More and more brands are starting to go electric. Ford is even offering an electric version of the F-150. So, it makes sense that Kia is taking the move to EVs pretty seriously. 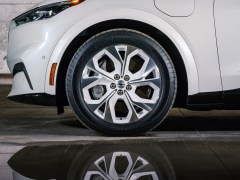 3 of the Best Electric SUVs According to MotorTrend

Once the Kia EV9 does arrive, it will likely start out being sold in fairly limited quantities. At least, that’s been the case with the EV6 so far. Supply chain issues are having a significant impact on the electric car market. And brands like Kia are certainly affected.

Hopefully, by the time the EV9 arrives, Kia will have gotten its level 3 driving system approved. If so, buyers will be able to enjoy a truly advanced safety system. Even if level 3 does not make a car self-driving, it will be a cool feature to start seeing more of.