The Kia EV6 is an electric SUV that has been garnering praise since it was introduced. It offers ample electric range, and it is cheaper than something like a Tesla. But for those who need a three-row SUV, the EV6 certainly is not it. That’s all about to change with the introduction of the Kia EV9.

The new Kia EV9 SUV will have the ability to seat up to seven passengers. Essentially, it will be like a Kia Telluride for those who want an electric SUV. That should be pretty exciting for families who are interested in exploring the world of EVs, and the EV9 will build on the success of the EV6.

Kia has been working on electrifying its lineup, so the introduction of the EV9 makes sense. It’s not on sale yet, but it has been getting teased since 2021. Overall, this three-row SUV looks rugged, and its interior promises to be fairly luxurious. It’s hard not to see it being a winner for this Kia automaker.

According to the Hyundai Motor Group, the Kia EV9 is going to get the Highway Driving Pilot feature. This is a Level 3 autonomous driving system, and you might be wondering what exactly that means. Essentially, a Level 3 system allows a vehicle to control itself on the highway without user monitoring.

Now, in the case of an emergency, the driver will still need to be able to step-in to make corrections. But still, Level 3 autonomous driving certainly feels like something out of the future.

It’s possible that the EV9 in the United States will not have the feature at its launch. At the time of publishing, no Level 3 systems have been approved for use on American roads. But, the Kia EV9 is expected to arrive for the 2024 model year. So maybe by then, we could be enjoying this kind of technology.

How much range will the Kia EV9 have?

Kia has stated the EV9 will have a maximum range of about 340 miles. Along with that, this electric SUV will be capable of fast charging. Much like the Kia EV6, that means being able to go from a 10% to an 80% charge in under 30 minutes. That will make this EV pretty practical in terms of daily use. 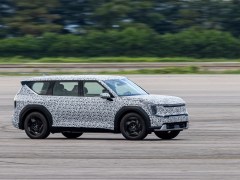 Kia Keeps Teasing Us: Photos of the Kia EV9 SUV in Camo

The EV9 will ride on the Electric Global Modula Platform, or E-GMP. This is the same platform that the Kia EV6 and Hyundai Ioniq 5 utilize. It has a flat floor, which allows for serious versatility. That means more room for things like passengers and cargo.

This Kia EV will be bigger than the current EV6. It also looks boxier according to current renderings. Really, it seems like the EV9 is trying to look like a rugged SUV, and that is not necessarily a bad thing. Consumers seem to appreciate a vehicle that looks like it is ready for adventure.