When Ford announced the F-150 Lightning, it made waves across the industry. Here you have a major brand turning its flagship vehicle into an EV. And as an electric truck, the Lightning has been extremely popular, even after getting some price hikes. In fact, the 2023 Ford F-150 Lightning has been named MotorTrend’s truck of the year. A serious honor for a newcomer.

The Ford Lightning is one of the first mainstream electric trucks

EVs have been around for some time, as have electric truck models. But with the 2023 Ford F-150 Lightning, it really feels like one will actually go mainstream. Sure, brands like Rivian have legitimately great vehicles, but the F-150 is an icon. And it’s built by one of the most well-known manufacturers.

According to MotorTrend, the Lightning appeals to a wide audience. More importantly, it should attract the traditional truck buyer. One of the perks of the F-150 Lightning is that it does not try too hard to be an EV. If you see one out on the road, you might think it’s just a regular Ford pickup truck.

How many miles can the F-150 Lightning go on one charge?

As stated by Car and Driver, Ford’s electric truck has a range of up to 320 miles. However, there are some stipulations on that. For instance, it’s become known that if you are towing with the F-150 Lightning, you are going to take a significant range hit.

And, you do have to pay extra in order to get the maximum range of this EV. Although, the same can be said for most electric vehicles that are currently on the market. With most truck owners not actually doing any towing, perhaps that range hit won’t really matter in the real world.

Unfortunately, if you want the Ford F-150 Lightning, it’s not going to come cheap. For the base model, you should expect to pay over $50k. That said, the F-150 Lightning Pro can make for a good work vehicle. And we do expect to see various companies adopting it for fleet use.

The top trim of Ford’s electric truck will require you to shell out nearly $100,000. Six figures is a pretty big ask for a truck. But, the Blue Oval was sure to equip the Platinum Extended Range with plenty of features.

Which Ford Lightning is best?

There are a range of trim levels with this truck, and the XLT trim seems to pose the best value. You can get it with the 312A High package, which comes with things like adaptive cruise control and the onboard power generator. 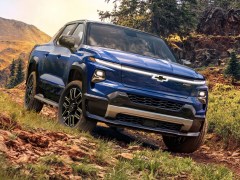 The Chevy Silverado EV Fails to Outmuscle the Ford Lightning

Actually finding an F-150 Lightning is going to be a difficult challenge, though. Ford sold out of its electric truck pretty quickly. So, even if you have the funds, you might not be able to find one. There’s always the option to look at the used market, but you will find that these trucks are selling for well over MSRP.