Finally, we have an idea of how much the Chevrolet Silverado EV can tow. However, the electric Silverado doesn’t exactly beat the Ford F-150 Lightning. It’s better in some ways, though. See what the 2024 Chevy Silverado EV should be able to do.

How much can the 2024 Chevy Silverado EV tow?

So, it matches the Ford Lightning when it comes to pulling trailers, but falls short in terms of payload. Also, the Rivian R1T can tow up to 11,000 lbs and carry a payload of up to 1,760 lbs. We’re still waiting to hear from the Ram 1500 EV, but rumors suggest it will tow more than 10,000 lbs.

However, rumors suggest that the electric Silverado will release a model that can tow up to 20,000 lbs a few months after the first models come out. That would be astronomical.

But when it comes to electric trucks, people are more interested in range. Towing tests have shown that some electric trucks can’t go very far while towing. Even our F-150 Lightning dropped over half of its charge with a 5,000 lb camper.

According to Slash Gear, Nicole Kratz, head engineer of the Chevy Silverado EV, shared that it’s important for full-size truck customers to be able to tow, haul, and do everything that they can with a traditional pickup truck. Chevrolet has set the bar and is validating an incredible product.

How much range does the 2024 Silverado EV have?

The 2024 Chevy Silverado EV is expected to offer a large battery pack that provides over 400 miles of range on a single charge. It’s unclear how much range the trucks with smaller battery packs will have.

Also, the larger battery pack could provide up to 754 hp. Other reports suggest that some models will have between 510 to 664 hp. It will be built beside the GMC Hummer EV, which has a 329 range and 1,000 hp.

The Silverado EV could be lighter than the Hummer EV, allowing it to have more range. The electric Hummer tips the scales at 9,063 lbs.

What else do we know about the 2024 electric Silverado? 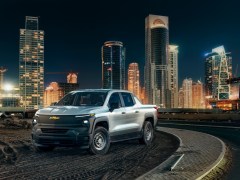 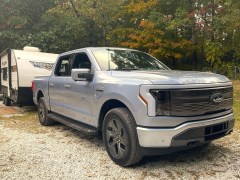 The 2024 Chevy Silverado EV could have tech that helps it regain about 100 miles of charge in 10 minutes with the use of a DC fast charging station. Rivals can replenish the charge from about 10 to 80 percent in about 15 minutes.

Also, the Chevy Silverado EV WT could be affordable as a popular fleet option or entry-level truck. It might start around $39,990. But the F-150 Lightning Pro started low and has received massive price hikes, so we need to see it to believe it.

Other models, such as the Trail Boss, First, Edition, and RST, will be more expensive. Don’t be surprised if some models crest $100,000.

If the Silverado EV can tow 10,000 lbs for up to 400 miles, then it will have an advantage by actually being able to tow long distances. Otherwise, it matches the towing capacity of the Lightning despite having more power.