Despite temperatures being below freezing, when I took delivery of the 2022 Lexus LX600, I knew I had to take this luxury SUV on an adventure. After all, it finds its roots in the Toyota Land Cruiser. A full-size SUV that is designed to handle some of the harshest conditions on the planet. And, even though the LX600 Ultra Luxury only seats four and has compromised cargo capacity, it handled western Kansas with ease.

At its core, the 2022 Lexus LX600 SUV is a Toyota Land Cruiser. And after the Land Cruiser was discontinued in the United States, it is pretty much the only way to experience a new one. Although it is a luxury SUV first, it still offers legitimate off-road capability.

According to Car and Driver, under the hood of every LX600 is a 3.4-liter twin-turbo V6 engine. It makes 409 horsepower and 479 pound-foot of torque. This Lexus SUV also comes standard with four-wheel drive and a 10-speed automatic transmission. All of these things translate to a comfortable driving experience. During my three-hour trip to Kanopolis State Park, I found little to complain about in terms of performance.

With a cost of $128,030, the LX600 I had the pleasure of testing came with all of the bells in whistles. But strangely, it only has two rear seats. The intention of this luxury SUV is to chauffer people. So, Lexus paid great attention to the back seats.

The rear captain’s chairs recline all the way, they are heated and cooled, and there are even two large screens on the back of the front seats. Unfortunately, that means the LX600 Ultra Luxury only seats four, and there isn’t as much cargo space as you would expect from a full-size SUV.

Even with these compromises, it’s hard not to feel like this vehicle is built for adventure. So, I took it on a one-night camping trip during winter conditions.

This luxury SUV can still adventure

Although it is focused on luxury and a premium feel, the LX600 Ultra Luxury was able to handle winter camping gear for two adults. That includes backpacks, provisions, and even bundles of firewood to stay warm in the cold. This Lexus SUV is not as practical as other 2022 LX600 trims, but it makes sense that the brand wants to show off what it can do. 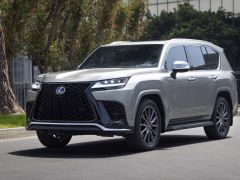 We didn’t get a chance to take the 2022 Lexus LX600 off-road, but it certainly has the chops to do so. This SUV features a locking differential, height-adjustable suspension system, and special drive modes for the road less traveled.

It’s unlikely that folks who shell out for the Ultra Luxury model will do any off-roading. But it is nice that Lexus did not skimp on capability, especially since the Toyota Land Cruiser is no longer available in the states.

At the end of the day, the Lexus LX600 had me longing for a 300 Series Land Cruiser. A vehicle that might be more basic but still is rugged and capable. For now, if you want a new Land Cruiser, you might find yourself behind the wheel of a Lexus full-size SUV.