With the discontinuation of the Toyota Land Cruiser, the 2022 Lexus LX600 is essentially the only way to get Toyota’s large SUV here in the States. Recently, I had the pleasure of testing this Lexus SUV, specifically the LX600 Ultra Luxury. And while this vehicle does come with all of the bells and whistles, it does have some drawbacks.

What is the most luxurious Lexus SUV?

The LX600 Ultra Luxury comes equipped with a twin-turbocharged 3.5-liter V6 engine. This powerplant is a departure from a traditional V8, but it does make 409 horsepower and 479 pound-foot of torque. If you are wondering, this engine handles highway speeds with ease, and it has a combined mpg of 22.

In terms of luxury, the LX600 Ultra Luxury truly shines. It comes loaded with all of the features you would expect from a luxury SUV. Ranging from soft-close doors to extremely comfortable seats. I drove this vehicle on a six-hour road trip and did not feel fatigued whatsoever, thanks to the leather seats with heated and cold functionality.

According to Motor1, despite all of the luxury, the LX600 still has the off-road chops the Land Cruiser is known for. And while nobody is going to take this configuration on the trail, it should be able to tackle things like snow with ease.

One annoyance I did find with the 2022 Lexus LX600 Ultra Luxury is the lack of a front wireless phone charger. In a world where even the Toyota Corolla gets that feature, you would think Lexus would make it a standard feature on this luxury SUV.

If you want a family SUV, you will want to look elsewhere. The LX600 Ultra Luxury is a full-size SUV that only seats four. Other trims come with three rows of seating with more cargo area. You might be wondering why this vehicle only seats four, and that is a valid question. 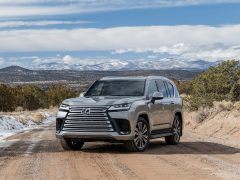 The Ultra Luxury is meant for chauffeuring, and frankly, it does a great job. Rear passengers are presented with massive seats that can recline all the way back. A large screen in the middle console gives access to things like a massage function as well as heated and cooled seats. Riding in the back makes you feel like one of the most important people in the world. And that is where this full-size SUV truly shines.

Unfortunately, this seating configuration does cut down on cargo space. But, as long as you know what you are stepping into, the LX600 Ultra Luxury is practical enough. The real question is if some of the compromises this SUV makes are worth the cost. And if you want a limousine experience in an SUV, they just might be.