Feast your eyes upon the new Toyota Hilux EV concept. This is a significant change for one of the world’s most popular trucks. It’s also a bit surprising since there were rumors about a hydrogen-powered Hilux floating around.

The Hilux has been the inspiration for the Tacoma for years, so does this mean that an electric Toyota Tacoma is on the way? Recently, rumors have suggested that a Toyota Tacoma Hybrid is on the way, but apparently, a lot of different models could be in the pipeline.

While the electric Toyota Hilux was being presented, Akio Toyoda, President, and CEO of Toyota Motor Corporation, shared that battery electric vehicles aren’t the only way to meet the world’s carbon neutrality goals.

What do we know about the Hilux EV?

The Toyota Hilux EV is currently a concept model known as the Toyota Hilux Revo BEV Concept. So, it may change a little before it enters production in about a year or so. One interesting feature includes the single cab setup.

It could mean that the closely related Toyota Tacoma could receive a single cab option. This has been something that truck drivers have wanted for a while.

Also, it has a traditional look. The electric Toyota Hilux is clearly based on the gas-powered model. However, it has a charging port near the front fender and a closed grille.

The electric Hilux is expected to be truly affordable and innovative. We would love to have an affordable electric option to fight the Ford Maverick here. The small, single-cab model makes us wonder if a new compact option is on the way.

There are two concepts. One is electric, and one is hydrogen. Both options are designed to meet the needs of various customers. One model is to support economic growth and mobility for all, while the other one supports carbon neutrality and a better environment for all.

So, will the electric Hilux or the hydrogen Hilux be the affordable truck? Also, is the Hilux going hybrid? Currently, there are a lot of ideas swirling around about the Toyota Tacoma Hybrid that borrows the same setup as the Lexus RX.

When are Toyota trucks going electric? 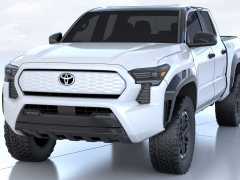 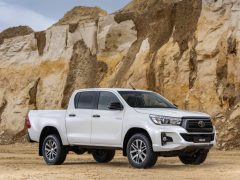 Why is the Toyota Hilux Banned in the US?

The Toyota Hilux EV and electric Toyota Tacoma could be months away. We don’t even have clues about how much power or range the electric Hilux has yet. It could be over a year before it enters production.

If the Tacoma is based on the Hilux, then it could be up to two years before it arrives. Also, we still think that a new smaller electric truck may be a possibility. It’s more likely that the 2024 Toyota Tacoma Hybrid will start the party in the United States.

We know that the Hilux EV is on the way, and it could lay the foundation for an electric Tacoma. Stay tuned for the latest developments as we follow this story.