How much power will the 2024 Toyota Tacoma Hybrid have?

The official sec for the 2024 Toyota Tacoma Hybrid haven’t been released, but we have a few clues to evaluate. Motor 1 shared that an electric Toyota Tacoma is in the cards yet. But it should get a turbocharged 2.4-liter four-cylinder engine with an electric motor.

This setup has been used in other Toyota vehicles. In the Lexus RX, it cranks out 366 hp and 406 lb-ft of torque. Also, in the Toyota Crown, the setup provides 340 hp and 400 lb-ft of torque.

Rumors suggest that the new Tacoma could get the gas-powered turbocharged 2.4-liter four-cylinder engine for the Toyota Highlander. It provides 265 hp and 309 lb-ft of torque.

These figures could change in the new Toyota Tacoma due to its weight and size. The engines could be tuned differently, too.

How efficient will the 2024 Tacoma be?

We don’t have the exact fuel economy figures for the 2024 Toyota Tacoma Hybrid yet. But it should do a little better than the current gas-powered model. The Tacoma gets an EPA-estimated 20 mpg in the city and up to 23 mpg on the highway.

The Toyota Crown gets an EPA-estimated 42 mpg in the city and up to 41 mpg on the highway. But it’s a sedan and is more aerodynamic than a mid-size truck.

The Lexus RX rings in with an EAP-estimated 31 mpg in the city and up to 28 mpg on the highway. This sounds more reasonable.

The new Tacoma will ride on the new TNGA-F platform that underpins the new Toyota Tundra, Toyota Sequoia, and the upcoming remodeled Toyota 4Runner.

While the Tacoma maintains its rugged body-on-frame build, the leaf springs could be replaced by a coil spring setup to improve its ride and handling. 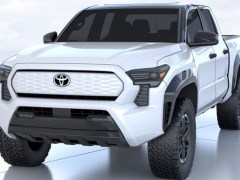 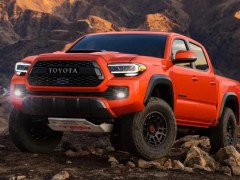 The 2024 Toyota Tacoma Hybrid is expected to look like the new Toyota Tundra and Toyota Sequioa with a larger grille that’s framed by LED headlights. It could have larger bumpers and new wheel designs too.

Plus, the interior is expected to be more refined. Hard plastics and other cheap materials could be replaced by higher quality options such as leather and pops of wood trim. We hope that the backseat features more passenger space.

The 8.0-inch touchscreen could be ditched for the massive 14.0-inch screen found in the Tundra. It’s safe to expect an updated digital gauge cluster, wireless phone charging pad, and more camera views. Hopefully, wireless Apple CarPlay and Android Auto will be standard.

We could learn more about the 2024 Toyota Tacoma Hybrid soon. It could debut at the beginning of 2023. Stay tuned for the latest updates.