Hyundai, a South Korean carmaker, is widely recognized for producing a wide range of historic cars and SUVs. The Hyundai brand is well established as a mark of sleek design and reliability and is most prevalent in Europe. While large automakers frequently attribute their brand names to their founder or another influential figure who helped establish the business, Hyundai is an exception to that norm, with a deeper meaning behind its name. So, what does the name Hyundai mean?

Hyundai was founded over 50 years ago

Chung Ju-Yung, the Korean businessman who founded Hyundai, established the Hyundai Engineering and Construction Company in 1947 after bouncing around various occupations. Then, 20 years later, Ju-Yung founded the Hyundai Motor Company. According to Hyundai, the first vehicle that the newly established Hyundai Motor Company worked on in 1968 was a Ford, in conjunction with the already successful Ford Motor Company. The car sold well enough that the brand soon sought to build its own vehicle.

Hyundai quickly hired George Turnbull, a seasoned automotive executive and former Managing Director of Austin Morris at British Leyland, according to AutoInfluence. Hyundai was able to create its own car in time for the 1975 model year, thanks to Turnbull’s hand-picked team of five distinguished British engineers.

The Hyundai name corporation reflects its history of technological innovation

The word “Hyundai” comes from the Korean word “hyeondae,” which translates to “modernity” in English, as outlined by Rewind & Capture. Given that the business always introduces new and cutting-edge vehicles and technology, this moniker has effectively characterized the brand.

The name Hyundai was initially chosen by Ju-Yung in 1947, the same year that the Hyundai Construction Company (now Hyundai Heavy) was established in South Korea. The current tagline of the Hyundai Motor Company, “New Thinking, New Possibilities,” highlights the organization’s overall goal and carries on the Hyundai meaning in keeping with the original concept of “modernity,” which is also depicted in their logo.

At first glance, the Hyundai logo appears to be a straightforward, contemporary-looking silver letter “H,” but it also has other connotations. The slanted “H” alludes to the meaning of the company name, as the tilt to the right suggests an eager, forward-thinking attitude as opposed to a more passive tone if it were leaning left.

According to Major World, a shadow of two people shaking hands that can be seen in the logo underlines even more how dedicated Hyundai is to teamwork and client satisfaction. It also evokes the traditional picture of a customer and a salesperson making a deal.

The Cortina was Hyundai’s first car 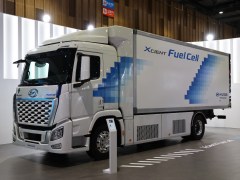 The Ford Cortina was the first vehicle on which Hyundai ever collaborated. This resulted from Hyundai’s collaboration with the already well-known Ford Motor Company.

Hyundai and Ford agreed in 1968, barely six months after the company was founded, to make Hyundai an assembler of Ford Cortinas, as detailed by CMA’s Hyundai of Winchester.

Ford produced the models of the time, including the Ford Cortina Mark II, and sent them to Hyundai’s factory in Ulsan, South Korea, for final assembly. Hyundai had the shortest period between the launch of their business and the full-scale operations of any Ford assembly factory in the world. According to Hyundai, the successful assembly of the Cortina in 1968 at the Ulsan Plant in South Korea demonstrated Hyundai Motor’s exceptional manufacturing capabilities.