The Rivian R1T truck is one of the most talked about all-electric trucks. It’s fast, it looks cool, and it’s built in America. They’re also expensive premium trucks with interiors and performance that matches their $73,000 price. But how safe is this premium midsize truck?

The 2022-2023 Rivian R1T has recently earned a Top Safety Pick + award from the Insurance Institute for Highway Safety, which is the highest rating the IIHS gives. To earn the recognition, the truck had to earn “good” ratings in six categories of tests. It also must be offered with a front crash prevention system that earns advanced or superior ratings in both vehicle-to-vehicle and vehicle-to-pedestrian evaluations.

In the Rivian R1Ts case, it met all of the requirements for the higher-tier award. Its headlights earned a good rating, and its crash prevention system earned a superior rating from the IIHS. The truck is made from aluminum, steel, and carbon fiber. The truck’s batteries are placed low, so the center of gravity is lower which helps prevent rollovers.

How much does a Rivian R1T cost?

All Rivian trucks are all-wheel drive with a dual-motor system, but you can order a quad-motor upgrade for $8,000. The standard battery offers 260 miles of range, but the Large battery, for $6,000, and Max battery, for $16,000, can bring your range to 400 miles. You can also order 20-inch or 22-inch wheels, as well as underbody skid plates, camping gear, tonneau covers, and more.

How fast is a Rivian truck?

The Rivian R1T comes in two flavors, the dual motor and the quad motor versions. The quad motor system uses one motor for each wheel. The front axle, then, gets 415 horsepower, while the rears get 420 horsepower, for a total of 835 horsepower and a diesel-rivaling 908 lb-ft of torque. According to Rivian, it can go from 0 to 60 miles per hour in three seconds. It’s quicker than the Hummer EV truck, too.

Who makes the Rivian truck? 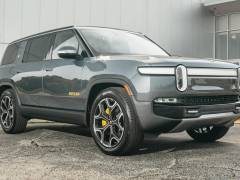 Rivian Automotive, Inc. is a new manufacturer based in Irvine, California. Its stock is traded on the NASDAQ at RIVN, so, technically, you can own some of Rivian. It was founded in 2009 by Robert “RJ” Scariange, who was born in 1983.

The company has developed a “skateboard” platform that uses for its R1S SUV version. That platform has an independent air suspension with six inches of vertical adjustment, so you can crank it up for off-road fun. Though the truck is capable and quick, it’s also winning design awards for its clever packaging.