Many car shoppers want to buy an SUV right now, and automakers have created many options for shoppers to choose from. Ultimately, the best SUV may come down to what each unique driver needs, but it can still be helpful to look at what car critics think is best. Here’s a look at the best 2023 SUV to buy, according to TrueCar.

SUVs have been rising in popularity lately

Every year, automakers continue to kill off sedan models, and one of the big reasons is that SUVs are becoming more popular than sedans. There are many reasons why customers are choosing SUVs over sedans, and many of those may have to do with the car’s spec sheet.

Since SUVs are larger than sedans, they come with some inherent advantages and disadvantages. For example, SUVs will almost always have more cargo capacity than sedans, and that can be enough of a difference for some families. SUVs also tend to be safer due to their larger size, which can be a compelling reason to buy an SUV instead of a sedan.

Automakers also benefit greatly from this boom, as SUVs tend to have a higher profit margin than smaller cars. As such, by making SUVs that shoppers want, automakers can make more money than if they invested more in sedans.

According to TrueCar, one of the best SUVs to buy right now is the Kia Sportage. It starts at about $27,000, which makes it reasonably affordable for most families. On top of that, the Sportage has a solid balance of features with few flaws. However, one of the Sportage’s flaws is that it has a worse fuel economy than some of its peers. The standard Sportage gets about 28 mpg combined, but Kia made an essential upgrade for the 2023 model year.

Kia now offers the Sportage as a hybrid and as a plug-in hybrid, or PHEV. Drivers who choose either of those options for their Kia will get a great SUV that’s more efficient than most cars on the road. The Sportage Hybrid has a fuel economy of about 43 mpg combined, while the Sportage PHEV can travel 34 miles in battery-only mode.

The Sportage really shines on the inside, however. It’s spacious and well-equipped, and even though the Kia SUV isn’t a luxury car, the South Korean automaker used high-quality materials to build out the Sportage’s cabin. With the rear seats folded down, it has a max cargo capacity of 74.1 cu-ft. The Kia SUV also has an 8-inch touchscreen and a suite of smart safety features that should keep everyone safe.

The 2023 Nissan Pathfinder is a good SUV to buy too 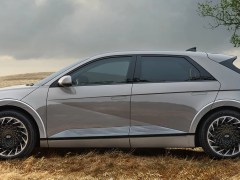 The Best SUV for 2023 According to MotorTrend

Those seats allow the Nissan SUV to carry up to eight people comfortably. The SUV’s cabin is “classy,” with an 8-inch touch screen as standard. That being said, the third row itself isn’t very spacious and only has 16.6 cu-ft of cargo capacity behind the third row. If owners fold down the second and third rows, the Pathfinder gets a max cargo capacity of 80.5 cu-ft.