Back in the early 2000s, it seemed like General Motors was running unchecked. The company was making some truly weird and sometimes unpractical vehicles. One of these wild vehicles is the Chevy SSR pickup truck. The SSR had just two doors, retro styling, and for a period of time came equipped with a Corvette engine. And although this Chevy truck was a huge failure, it does have some redeeming qualities. These might be the top three cool ones.

The Chevy SSR had an LS2 engine

Although this Chevy truck initially came with a 5.3-liter V8 making 300 horsepower, eventually, GM decided that wasn’t enough. In 2005, Chevy added the LS2 engine that was in the C6 Corvette. That’s right, the same engine that was found in Chevy’s most iconic sports cars was also used by a truck that was styled after pickups of the 1950s.

That’s not all that’s cool about the SSR in terms of the driving experience. You could get it with a six-speed manual, which is certainly a rarity in today’s trucks. If you want a Chevy SSR with a standard transmission, you will need to look for one made after 2005.

The SSR is a convertible truck

If you need any indication that the SSR is not a normal truck, take a look at the roof situation. It might look like a regular cab, but it actually has a power-retractable hardtop convertible roof. That means you can enjoy an open-air experience while driving this weird GM product.

The convertible situation really does add to the retro feel of the SSR pickup truck. And the retro-ness does not stop there. There are a lot of curves throughout this vehicle, and it’s only available with two doors. That might have contributed to the failure of this Chevy truck. Most folks tend to prefer a vehicle with four doors, unless it’s a sports car.

The Chevy SSR was a pace car at the Indy 500

According to MotorTrend, the Chevy SSR was the Indy 500 Pace Vehicle back in 2003. That did not stop it from being discontinued after just a few years, but it is cool nonetheless. The Indy 500 is an iconic race in the United States. So being the pace car probably gave the SSR plenty of publicity back in the day. 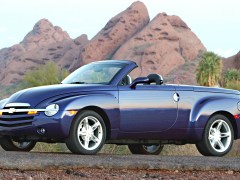 Check Out the Chevrolet SSR’s Quirks and Features

At the end of the day, Chevy only sold about 9,000 units of the SSR in 2003. And things did not get much better from there. In total, roughly 25,000 models of this truck were built during its run from 2003 to 2006. That means today; they are somewhat of a rarity. And honestly, I do think that this truck does deserve some respect.

It is not unusual for a vehicle to not be popular in its time. And the SSR was a product of brands trying to build “retro” vehicles, including the Ford Thunderbird. Although this truck is not really good at doing truck stuff, it looks cool and isn’t like anything else on the road.