In terms of being a full-size truck, the Nissan Titan is often overlooked. As an established pickup, it was one of the least popular pickups for 2022. And that is likely why Nissan has plans to put its large truck on the chopping block. Despite that, the Titan is not necessarily a bad truck. In fact, owners seem fairly satisfied with it. So, maybe it’s time to reconsider how we view Nissan’s full-size truck.

Is the Nissan Titan reliable?

Although it’s not popular, Nissan Titan reliability does seem high. Most publications give it a good rating. According to RepairPal, it actually ranks 2nd out of 17 for full-size trucks. It actually has a predicted lower cost of ownership than other pickup trucks as well.

Now, in 2022, the Nissan Titan did have a fairly significant recall. The nine-speed automatic transmission proved to be problematic, and that impacted multiple Nissan products. Essentially, even in park, the Titan could roll away. And clearly, that’s not ideal. Nissan is working on a solution to this problem.

In a world where more and more truck manufacturers are moving away from traditional eight-cylinder engines, Nissan is staying the course. The 2023 Titan comes standard with a 5.6-liter V8 engine that makes 400 horsepower and 413 pound-foot of torque.

The VK56VD engine might not be the most technologically advanced, but it works. It’s also known to be able to go over 250,000 miles with proper maintenance. And when it comes to a full-size truck, that’s a good thing. Truck owners tend to keep their vehicles longer than car owners. So it’s important to know that an engine is ready to pack on the miles.

When I drove the 2022 Toyota Tundra, I was impressed with the new twin-turbo V6. It’s a potent engine and feels legitimately quick. You can even get slightly better fuel economy over Toyota’s old V8. But that engine comes with a big question mark. How long is it going to last?

More importantly, what will maintenance look like once the 3.5-liter twin-turbo V6 gets past 150,000 miles? It’s questions like those that should make us appreciate that Nissan is sticking to the basics with its V8 engine.

Nissan’s truck does have some shortcomings

Being an old-school truck does come with some sacrifices. The 2023 Titan does not have an extreme off-road model like most of the competition, and it might fall short in terms of luxury. Unfortunately, those are two things that the modern consumer seems to enjoy. 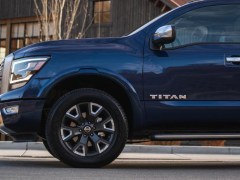 Is the 2023 Nissan Titan Worth Its New Price?

Maybe if the Nissan Titan had a lower starting cost, it would be easier to overlook those things. But as Car and Driver has pointed out, this is one of the oldest new trucks you can buy, and its MSRP starts at over $40,000.

Still, on paper, I do think there is some justification for Nissan’s full-size truck. Especially if you buy into the idea that pickups should be vehicles that can be driven into the ground. It looks like I might be in the minority there, but I’m also not headed to the dealership to buy a new pickup truck.