As a full-size truck, the Nissan Titan has never really led the pack. And soon, it may very well be on the chopping block. Apparently, Nissan does have plans to kill its half-ton pickup truck. Despite the success of the redesigned Nissan Frontier, this full-size truck is likely on the chopping block. Even as the only full-size pickup truck with a standard V8 engine, the 2023 Titan just can’t keep up with the competition.

On paper, the Nissan Titan does seem like a good full-size truck. It comes standard with 400 horsepower thanks to its V8 engine, and there is a long list of standard features. But, with a starting MSRP of $39,700, for its age, that seems like a big ask.

That fact is not lost on consumers, as the Nissan Titan is one of the worst-selling full-size trucks in the U.S. According to Car and Driver, it isn’t even worth considering some of the higher trims; the publication recommends sticking with the base S model.

But, even as a work truck, the 2023 Titan does offer some solid standard equipment. These features include things like:

The Titan S might limit what you can add as options, but it will be the cheapest version you can get.

Nissan has plans to axe the Titan

With no major redesign planned, Nissan does have plans to kill off its full-size truck. And, it’s hard not to think that if the brand gave the same attention to the Titan as it did the new Frontier, it could be a winner. The third-gen Nissan Frontier is a fairly successful mid-size pickup truck. It now boasts a standard V6 engine and a more modern design.

The Titan half-ton truck has not seen a generation change since 2017. And its age is certainly beginning to show. Especially as brands like Ford, Toyota, and Ram sink more money into this segment.

Although there is a Titan PRO-4X, it’s not really enough to compete with the Ford F-150 Raptor or Ram 1500 TRX. The package only adds skid plates, Bilstein shocks, and an electronically locking rear differential. Needless to say, this is not a truck you will want to put in serious off-road situations. 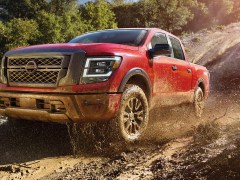 The 2023 Nissan Titan Got a Price Hike

It would certainly be cool if Nissan gave the Titan a legitimate off-road package. Especially if it meant coming with more power. But that does not seem to be in the cards for this full-size pickup.

The Titan is expected to remain in production until 2024. After that, the Titan will likely say goodbye to the public, going out without any major changes. Because of that, sales will probably remain stagnant. This full-size truck might offer a long list of standard features and a good warranty, but that just isn’t enough to save it from discontinuation.