The Honda Ridgeline has long been Honda’s mid-size truck. It was first introduced for the 2006 model year, and it shares a lot of its DNA with the Pilot SUV. In terms of Honda Ridgeline generations, it is currently in its second. The second generation arrived in 2016 as a 2017 truck. And, it does have a lot to like about it. But who is this mid-size pickup truck actually for?

The Honda Ridgeline is a quirky truck

When the Ridgeline truck first hit the market, there was not really anything like it. It is a unibody truck, smaller than something like a Ford F-150, and it comes with some legitimately cool features. Generally speaking, the 2023 Honda Ridgeline shares a lot of its components with the Pilot. But Honda did have to make some modifications in order to make it work.

In terms of features, new Ridgeline trucks come with standard all-wheel drive, a V6 engine, and a five-foot bed. This Honda Ridgeline generation really reflects that the brand is invested in its pickup. Even if it is not all that popular with consumers.

If you need an indication that this is not your normal pickup truck, there is an available feature to turn the Ridgeline’s bed into one giant speaker. Plus, you get some under-bed cargo space for items you don’t want out in the open.

Is the Ridgeline a good truck?

On paper, the Honda Ridgeline might not seem like a great truck. Because of its unibody construction, you are going to lose out on capability. At the same time, how many truck owners actually use their pickups for truck stuff? According to The Drive, the number is not that many.

Where this mid-size truck excels is in its comfort. Driving it, you could almost forget you are behind the wheel of a pickup. And for daily use, I do feel like that is a good thing. The V6 engine makes 280 horsepower, and fuel economy is rated at 18 mpg city and 24 mpg highway.

Where Honda’s truck does fall short is its capability. In terms of Honda Ridgeline generations, neither of the two has been as capable as other mid-size pickups. The 2023 Ridgeline can tow 5,000 lbs and haul up to about 1,600 lbs. That certainly is not as much as rivals. Another issue is the lack of a dedicated off-road trim.

Most new mid-size trucks can come with legitimate off-road gear. Think the Toyota Tacoma TRD Pro, Nissan Frontier PRO-4X, and the Ford Ranger FX4. Unfortunately for the Ridgeline, it can’t really compete in that world.

Is Honda redesigning the Ridgeline?

According to Car and Driver, the Honda Pilot is getting a redesign for 2023. Shortly after that, the Ridgeline will likely enter its third generation. Because the Ridgeline is based on the Pilot SUV, it will need to wait a bit before getting its redesign. 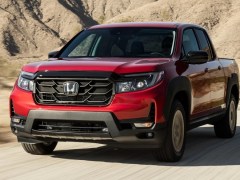 Is There a 2023 Honda Ridgeline Hybrid?

And, who knows, maybe a new Ridgeline will breathe some new life into this mid-size truck. It has certainly been a favorite of journalists, but that has not translated to consumers.