We suppose you can call them super-SUVs, or maybe hyper SUVs, but today some luxury brands (and Dodge) are building SUVs that can nearly reach 200 miles per hour. Those are speeds that are seriously quick, and until recently you needed a sports car with giant tires, wings, and guts to push to those limits. Now, you can do it from a leather-lined luxury SUV. But which one is the fastest?

The Lamborghini Urus is the fastest SUV you can buy

The Lamborghini Urus, according to Lamborghini, can hit 190 mph, or 305 kph. That makes the Urus the fastest SUV you can buy today, that is if you can afford its $230,000 price tag. It can achieve those speeds thanks to its 650-horsepower twin turbo V8 and lots of downforce. The new Performate version, however, makes 657 horsepower, though Lambo hasn’t said it has a higher top speed.

And, for some reason, Lambo decided that it needed to prove its mettle on ice, in May of last year it set a 185-mph record for driving on the slippery stuff. It can go from 0-60 mph in 3.3 seconds. Though the Urus tops out at a ludicrous speed, the Bentley Bentayga is a very close second. It has a top speed of 187, thanks to its slippery body and 600-horsepower 12-cylinder engine. Until recently,

You can spot the Model X SUV by its unique gull-wing rear doors that open like those of a DeLorean. IT has a range of 333 miles, and in Plaid trim has an astonishing 1,020 peak horsepower. Of course all of that quickness isn’t cheap, with the base version coming in at $112,590, while the Plaid package ups that to $130,590.

The second-quickest SUV you can buy is the $92,000 Dodge Durango SRT Hellcat which is, sadly, in its last year of production. It can sprint to 60 mph in 3.5 seconds thanks to its 710-horsepower American V8.

Could the new Ferrari SUV challenge the Urus? 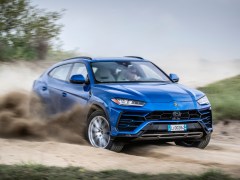 Most definitely the new Ferrari SUV set its sights on dethroning the Urus, it’s cross-country rival. The new Purosangue, which should hit the streets in 2023, will have 715 horsepower from a massive 6.5-liter Ferrari V-12 engine. Ferrari dropped a similar engine in its 812 Superfast car that can top 200 miles per hour, though that car does weigh less. Unfortunately, the Purosangue is sold out until 2025.