You may have heard a friend say something like “Nice brodozer, dude,” and likely with a sarcastic tinge in their voice. We’ve all seen those giant, lifted show trucks, probably with a cab so high you wonder how someone even gets in. Those are brodozers, and to some there is an art to turning a pedestrian truck into something so giant that it’s nearly useless as a truck. But what is a brodozer, and are they cool?

Most owners of brodozers prefer to call their trucks show trucks because they’re built to show off. Like super-low sports cars that can’t go over a speed bump or lowriders that bounce on hydraulics, these trucks aren’t made for practicality. They’re fun, giant, tall, vehicles that unlike anything else on the road say, “Hey, look at me!” Even if some love to hate on the trend.

Like many car subcultures, show trucks are an art form that takes lots of money and time. The owners of these trucks can easily spend $100,000 on wheels, tires, paint, bed kits, lift kits, bumpers, and more.

What makes a truck a #brodozer?

A show truck is a separate class from a lifted street truck. The show truck driver is part of a unique tribe that likes crazy custom parts, amazing lift kits, big wheels with 12 layers of paint, big stereos and of course train horns. Many of these trucks have paintjobs that cost more than your average RAV4, as well enough LED under glow to light a roller rink. They take the off-road lift to another level, but with 42-inch wheels and tires that you’d hate to get muddy.

Like many in the custom truck scene, most show truck owners prefer to do their own work, rather than pay someone else to do it. The first thing most do to make a show truck is get a giant lift kit, usually a foot or more. Then, the next accessory has to be a bumper, often with integrated lights, a custom grille, and if they’re a diesel, a giant exhaust. Lighting is also key. Modern LED lights keyed to the paint of a truck add a very cool custom look.

It’s no surprise that these trucks are often worth more than a $100,000. Of course lifting a truck so high makes the bed useless, but that’s not the point. Even if some like to stereotype this truck owner, they take pride in these monster rigs.

Are lifted trucks safe or legal?

A lifted truck can be safe. The danger in building a lifted show truck is using cheap parts that could break, like suspension arms and lengthened drive shafts. The trucks generally have a terrible turning radius, and it’s hard to see over the hood. But, for an experienced pilot, they can be safe, even with their tall center of gravity.

Legality depends on where you live. In some states, like Texas, many modifications are allowed on the street, and in others, not so much. But any lift will lower your gas mileage.

Where do you show a show truck?

The Lifted Street Nationals held every September in Missouri, and the Carlisle Truck Nationals in Carlisle, Pa., and of course SEMA in Las Vegas. These national shows attract show truck owners from across the country. They compete in several categories, like tallest truck. Many lowrider shows and other custom car shows are now also starting to recognize the time and effort that builders put into these trucks and have judged categories for them, too. Though these trucks are usually so tall and wide, they need their own parking lots.

What brand makes the best brodozer, or show truck?

When you look at the majority of show trucks on the road, it’s fair to say that most are Fords. The F-250 and F-350 trucks are popular because of the vast amount of aftermarket kits available, plus they’re often diesels. The Super Duty trucks have Power Stroke V8s. Of course, any heavy-duty Ram, Chevy or GMC will work, too.

Though most lifted trucks come from American manufacturers, CNET did find a lifted Tacoma set up for off-road duty at SEMA.

Is the BroDozer different from a brodozer? 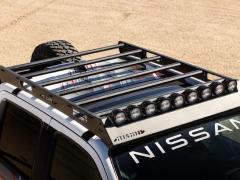 Keep the Bonkers Truck, but Please Give Us the Frontier Accessories, Nissan

The first truck to properly be called a brodozer is the appropriately named BroDozer monster truck. In its Tonka Truck-inspired yellow paint, it became one of the most popular trucks on the Monster Jam circuit because it bucked the rules. Most monster trucks are powered by nitromethane, like a top-fuel dragster. BroDozer, built by the Diesel Brothers, is the only diesel-powered monster truck to compete and it sounds like an out-of-control Peterbilt as it launches over jumps and spews black smoke in an arena.