Toyota started the trend of advertising a truck’s capability on the bed years ago. Since then, every manufacturer has used that billboard-sized space to announce their trucks’ special editions, special features or off-road prowess. Often, you’ll see a Ford truck, whether that’s an F-150, a Ranger or a Maverick, with the letters FX4 on the bed. That’s Ford’s designation for its off-road truck package..

What is the FX4 package at Ford?

FX4 simply stands for Ford 4×4. In many ways, that is what it is, except the FX4 adds more than just a four-wheel drive transfer case. In Ford’s case, the standard 4×4 F-150  trucks come with a manual two-speed transfer case, which can help get you out of some sticky situations.

The FX4 F-150 package adds a lot: it includes Rancho shocks with a slight lift. FX4 trucks also get a limited-slip differential and, often, an automatic shifting transfer case. They also get an electronic locking axle and hill descent control, which are both critical features for off-road driving. The package also includes skid plates that cover the transfer case, the front differential, and the fuel tank. The new Rattler trim, shown above, is an FX4 package with some slight changes.

Though that’s just a few simple upgrades, FX4 trucks can tackle trails that many trucks would balk at. However, the Tremor packages and Raptor include more off-road features. And, in case you were wondering, the Expedition Timberline replaced FX4 version of that SUV, according to FordAuthority.

What is included in the Ranger’s FX4 package?

The FX4 package is available on Ford’s F-Series trucks, even the Super Duty versions, and the FX4 Ranger. The Ranger’s 4×4 FX4 package, though, is slightly different. In the Ranger’s case, it gets a Dyna front axle and a solid rear axle. It also gets a sophisticated terrain management system that allows the driver to select a driving mode. Like the F-150 it has frame-mounted skid plates. However, it does come with two stiffened tie hoops on the front so you can pull a buddy out of a ditch (or get your own truck un-stuck)

What is the FX4 package on a Maverick? 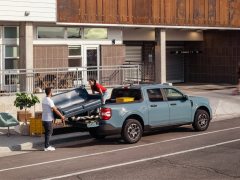 The Ford Maverick, Escape, and Bronco Sport Are All the Same. Sort Of.

The Maverick’s FX4 package is substantially different from the packages on either the Ranger or the F-150. The Maverick is base on the Ford Bronco Sport platform, so it’s more of an SUV underneath than a pickup. However, that doesn’t mean that it’s not a capable off-roader.

Just like its SUV cousin, the Bronco Sport, it gets all-wheel drive. But, that means you have to get the more powerful 2.0-liter engine. You also get (yay!) tow hooks, and skid plates, and the drive mode selector gets two additional clicks for sand and mud/ruts. But, the Maverick FX4 has just 8.6 inches of ground clearance, which means that its break-over angles are fairly shallow for hard work off-road. Still, it adds a lot of capability to Ford’s entry-level truck.

The FX4 package on the Maverick costs $800 more, and also adds a clever off-road screen in the dash.