Lincoln now makes four SUVs and the company is making a push to make each upscale. While these SUVs are mostly re-badged Fords with leather, calling them that doesn’t really do these updated, and luxurious, SUVs justice. While the small Corsair gets a significant refresh this year, what else can we expect from Lincoln?

The 2023 Corsair gets a tech, and styling, upgrade

The Corsair is in a tough market, and has to contend with small SUVs from Audi, BMW, Infiniti and others. However, with its 250-horsepower turbocharged four-cylinder or the 266-horsepower plug-in hybrid powerplant, it has a slightly different mission than those performance SUVs. For 2023, though, it gets a new grille, new colors, and a pair of larger screens paired with SYNC, and loses an engine option.

Though it’s not as eager to hit the curves as, say, a BMW X3, it does provide solid American luxury. Though the base version starts at about $40,000, the Grand Touring with its plug-in efficiency is one not to forget about.

The Lincoln Nautilus SUV carries over, mostly, for 2023

The Nautilus was all new for the 2021 model year and still looks fresh, so other than colors, it hasn’t changed. The Nautilus slots between the Corsair and the Aviator as a larger five-passenger SUV. It comes with two versions of the Ford EcoBoost engines, either the standard 250-horespower version or a stonking turbocharged V6 with 335 horsepower.

The Nautilus is interesting in that for makes the U.S. version in Ontario, Canada, while a similar version is made in China for that market. The Nautilus gets the latest version of Ford’s easy-to-use SYNC system for controlling most of the options. It also gets a 13.2-inch horizontal screen that’s easy on the eyes. It also comes standard with Co-Pilot360 driver’s safety aids. The nautilus starts t $44,825,,

The Aviator gets some new colors, PHEV power

The big news for the Aviator in 2023 is its new Black Label package. The Black Label adds black trim and wheels, but that’s about it. The seven-seat Aviator is now in its second generation, which launched in 2020. The 2023 Aviator starts at $53,340, however it too, comes as a plug-in hybrid version that pairs a V6 with an electric motor to make an impressive 494 horsepower.

The Navigator keeps its top-dog status 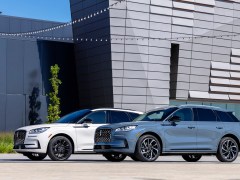 Is Lincoln Aiming to Embarrass BMW, Lexus and Audi With the new 2023 Lincoln Corsair?

Lincoln’s eight-passenger full-sized SUV for 2023 gets some new colors and towing enhancements, according to J.D. Power. But that’s about it for the brand’s flagship monster-sized SUV. The Navigator starts at $70,725, but options like captain seats in the center row, ActiveGlide hands-free highway driving, and much more available. You can also order it in an extra long L version that adds some legroom and cargo room in the way back.