Most cars are built to take a beating and still survive, but there are obvious limits, such as a high-speed car accident. An engineer put a vehicle through one of the most extreme tests imaginable. He dropped an Opel Corsa Swing hatchback 150 feet down onto the world’s strongest trampoline. See which one survives in this “Car vs. World’s Strongest Trampoline” viral YouTube video.

The “Car vs. World’s Strongest Trampoline” YouTube video, which has gone viral with over 30 million views, is the brainchild of Mark Rober, an inventor, engineer, and educator. His popular YouTube channel features do-it-your-self gadgets and science experiments. Earlier in his career, Rober was an engineer for NASA for nine years, including work on the Mars Curiosity rover. He also worked on Apple’s self-driving car project.

Rober’s engineering expertise and ingenuity are on full display in the “Car vs. World’s Strongest Trampoline” YouTube video, especially for the construction of the trampoline. To make the world’s strongest trampoline, which weighs two tons, Rober and his team used a mat made out of kevlar, the material used in bulletproof vests.

The trampoline also has 144 massive garage door springs. Each of the springs can support 450 pounds of weight, which translates to nearly 65,000 pounds the trampoline can support in total — at least in theory. As detailed by J.D. Power, the average weight of a car is much less: around 4,000 pounds, according to the EPA.

Also, the Opel Corsa Swing supermini hatchback in the video weighs even less — around 2,000 pounds. So, the trampoline should be able to withstand the impact. However, there’s also a little thing called gravity — which adds to the impact force.

The Opel Corsa Swing hatchback in the YouTube video might be unfamiliar to many American viewers. However, in much of the world, the Opel Corsa, and its variants, including the Swing, are ubiquitous. Opel is a German automaker.

In recent years, the Toyota RAV4 compact SUV and the Toyota Corolla compact car have alternated between the first and second spots for the best-selling car in the world. However, in 1998, the Opel Corsa took the title of the world’s best-selling car — with nearly one million units sold.

The video was shot in Australia. However, the Swing variant of the Opel Corsa was mostly sold in countries in Asia, such as India and Thailand. With this in mind, the Corsa Swing in the video was likely imported into Australia as a used model.

Before the car, other items were dropped — bowling balls, watermelons, and a water-filled yoga ball

The “car drop” part of the video starts at the 9:20 mark. However, it’s worth watching the video in full, especially with how Rober details the engineering aspects of the trampoline and the stunt. He also eloquently describes the beauty of science, using as an example — the ability to precisely predict the amount of time it takes for an egg to hit the ground after dropping it from the roof of a house.

The former NASA and Apple engineer said, “By doing math, I can tell you it will take exactly 0.83 seconds for this egg to hit the ground. There can be opposing philosophies, governments, and opinions around the world, but we’ll never get agreement on who was most right. But if all the scientists and engineers on the planet would get together and hang out, they’d all be friends, and they’d be like, yeah, we solved it too, and 0.83 seconds is exactly what we came up with.”

Also, before the car drop, Rober and his team, as well as Australian scientists from another YouTube channel, dropped other objects onto the trampoline. They started off small with one bowling ball and one watermelon, then proceeded to 20 bowling balls and 20 watermelons. The teams proceeded to other items, including hundreds of water balloons at the same time, a water-filled yoga ball, a large ice block, and a large concrete ball.

In all of these drops, the trampoline easily withstood the collisions. Also, except for the water balloons and watermelons, the items bounced off the trampoline with no initial damage. Even the water-filled yoga ball was still intact when first bouncing off the trampoline. It only exploded after the secondary impact of hitting the ground.

Trampoline wins the battle, but the car lives to see another day 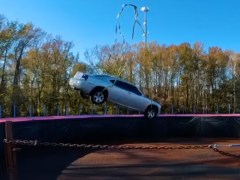 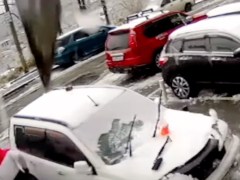 The car provides a much heavier challenge to the trampoline, though. An Australian man shouts, “3, 2, 1!” The Opel Corsa Swing steadily drops and slams into the trampoline. Like the yoga ball, the car initially bounces off the trampoline with no severe damage, except for the hatchback door flying open.

However, it took a major beating on the successive bounces and collisions. In another bounce, the car struck the outer metal bar circling the trampoline, did a 360-degree flip, and then landed upright.

As far as the trampoline, it lived up to its title as the world’s strongest. Other than some slight bending of the bar and stretching on some of the springs, the trampoline held up very well. Also, despite the beating that the Corsa Swing took, it remained mostly intact. So, the trampoline won the battle, but the car lived to see another day.

Rober and his team likely chose the Corsa Swing supermini car because it weighs less than most other vehicles. It would be interesting to see if the trampoline could take a hit from a larger vehicle, such as a full-size pickup truck or SUV.