Automakers have made strides in improving the gas mileage of vehicles. These efforts have helped reduce carbon emissions and the negative effects of climate change. Along with producing more electric cars, the fuel economy of gas-powered vehicles gets better every year. However, there’s much room for improvement. Furthermore, according to an Environmental Protection Agency (EPA) study, there is something that’s killing the progress on climate change: big pickup trucks and SUVs in the United States.

Recently, the EPA published its 2022 Automotive Trends Report. Unfortunately, the EPA report reveals that American automakers and consumers are hindering the progress of reducing the polluting carbon emissions that cause climate change.

The gas mileage has gradually increased for cars in each vehicle class. However, the shift from sedans to bigger pickup trucks and SUVs in recent years has canceled out the anticipated benefits. To put it more bluntly, Americans are buying more gas-guzzling big trucks and SUVs instead of smaller, fuel-efficient sedans.

Understandably, consumer and environmental advocates are disappointed by the results of the EPA study. Avi Mersky, a transportation researcher, said to Yahoo News: “Some models got more efficient, but with the automakers marketing large SUVs so heavily, they’re taking up more and more market share. The manufacturers are canceling out all the efficiency progress as they sell more large vehicles.”

Automakers that sell vehicles in the United States are required to adhere to EPA fuel economy requirements. Each vehicle class must reach a certain mile per gallon (mpg). Due in part to these regulations, gas mileage has approximately doubled for cars sold in America since 1975. As a result, carbon emissions from vehicles have been cut in half.

However, the shift toward big trucks and SUVs has prevented the improvement in efficiency from being even greater. As a result, the reduction of emissions is much less than what it could be. The EPA sets different gas mileage standards for each vehicle class. And for trucks and SUVs, the required mpg is lower than for sedans.

The fuel economy for each weight category reached a record high in 2021. However, this progress was offset by the shift toward heavier vehicles. In 2021, the average gas mileage for all vehicles sold in the U.S. was 25.4 mpg. Despite the improvements in efficiency, this fuel economy was the same as it was in 2020.

In its report, the EPA stated, “In model year 2021, sedans and wagons fell to 26% of the market, well below the 50% market share they held as recently as model year 2013, and far below the 80% market share they held in 1975.” Conversely, “truck SUVs,” or SUVs so large they can be classified as a truck instead of light trucks, reached a record 45% market share, while pickup trucks increased to a 16% share. Also, since “truck SUVs” can be classified as heavy trucks, they have a lower gas mileage standard than light trucks.

Merskey continued: “The automakers are both making fewer cars, in favor of trucks, and making those trucks themselves bigger. It is also worth noting that even within these categories, vehicle footprint has been creeping upward.”

Transportation is the largest contributor of carbon emissions in the US

For its international climate change agreements, the U.S. pledged to cut its carbon emissions by 50% by 2030. However, the shift in America toward big pickup trucks and SUVs makes it difficult to reach this target.

Transportation is the largest contributor of carbon emissions in the U.S. While part of the emissions come from air travel, a significant portion is from the automotive sector. The Biden administration finalized ambitious automotive efficiency standards for 2024-2026 model year cars. However, climate change experts advise that the next round of standards should be even more ambitious. These standards, which will be for 2027 and beyond model year vehicles, will be proposed in March 2023.

Furthermore, experts cite the need to change the framework of the EPA standards to improvise overall efficiency. “EPA would also be justified in adding a ‘backstop’ to these standards. This would be a minimum fleetwide fuel economy, which, if not met, would automatically tighten the fuel economy and emission standards on all vehicles,” said Merskey. 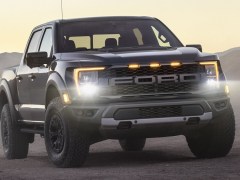 Why Are American Cars so Big?

As shown by consumer habits, getting Americans to choose smaller, more efficient cars instead of gas-guzzling big trucks and SUVs is a difficult task. This resistance occurs despite facing the dire effects of climate change. However, for Americans that bemoan EPA regulations and other government mandates for cars, it’s worth noting the U.S. is extreme compared to the rest of the world (especially developed countries) in its resistance to addressing climate change.

The U.S. was an international pariah for being one of the last countries to sign (after previously exiting) the Paris Climate Accords. Furthermore, compared to other developed countries, especially Europe, the fuel economy standards in the U.S. are much lower. Part of this is due to Americans’ resistance to regulations and desire to drive whatever they want — without government interference.

In weighing “individual rights and freedoms” versus “greater good for society,” the U.S. leans more heavily toward the former compared to Europe and other developed countries, as detailed by the Washington Post. This greater acceptance of regulations in other countries compared to America applies not only to the automotive industry — but also to most regulatory issues that are contentious in the U.S. This includes regulations for healthcare, safety, privacy, and economics.

Outside the U.S., cars tend to be smaller, as people place greater value on the need to have more efficient cars, among other reasons. For many drivers in other countries, fuel-efficient cars are not even a negative regulatory issue. People just recognize that the benefit to society and the world as a whole far outweighs one’s personal desire for the car they want to drive.

In contrast, Americans tend to drive bigger gas-guzzling trucks and SUVs. And as a result, they kill the progress of climate change, as evidenced by the EPA study.