The United States was the first country to put a human on the moon with the historic Apollo 11 mission in 1969. Now, as the U.S. aims to return astronauts to the moon by 2025, it faces a major competitor: China — along with a new space race. Also, Bill Nelson, the head of NASA, warns that if China beats the U.S. to the lunar surface, it could claim the moon as its own territory.

The 26-day Artemis I mission to the moon in November 2022 marked the start of a new chapter in NASA’s space program. Experts view the mission as a big success. It featured an uncrewed Orion space capsule that flew around the moon. The mission was an important step in achieving the goal of returning American astronauts to the lunar surface — and “building a more permanent presence,” as detailed by Politico.

However, the U.S. isn’t the only country with moon ambitions. Following the successful Artemis I mission, NASA Administrator Bill Nelson spoke with Politico. In the interview, he warned about China’s potentially nefarious intentions for its moon missions. Nelson sounded the alarm about how if China places astronauts on the lunar surface before the U.S., it could “establish a foothold and try to dominate the most resource-rich locations.” Furthermore, it could try to “keep the U.S. out.”

Nelson said, “It is a fact: we’re in a space race. And it is true that we better watch out that they don’t get to a place on the moon under the guise of scientific research. And it is not beyond the realm of possibility that they say, ‘Keep out, we’re here, this is our territory.’”

China has antagonized multiple countries in the region with the South China Sea territorial disputes. This includes the Philippines, Vietnam, Indonesia, Malaysia, Brunei, and Taiwan. In a landmark ruling in 2016, the international tribunal court at The Hague ruled against China. The ruling stated that there is no evidence to support the country’s exclusive historical claim on the waterway.

China ignored this ruling and continued to expand into the South China Sea. This includes building military bases on the contested Spratly Islands. “If you doubt [China claiming the moon], look at what they did with the Spratly Islands,” said Nelson.

China has made significant strides with its space program

The concern about China’s moon ambitions also stems from the significant advances that the country has made with its space program. This is not only a concern of NASA but also the U.S. Department of Defense. The DOD already has growing concerns about the ability of the Chinese space system to harm American satellites, and now the moon missions are a major concern as well.

The Pentagon recently sent a report to Congress that highlights the considerable advancement of the Chinese space program. This includes a “pioneering ability to land on the far side of the moon.” There’s also an innovative communications relay between the Earth and the moon using a satellite launched a year earlier. Additionally, the report details how China improved its “ability to manufacture space launch systems for human exploration farther into space.”

Plus, over the last few years, the Chinese space program has sent robotic landers and rovers to collect samples from the lunar surface. It was the first country to do this on the far side of the moon. Also, China recently opened a new space station.

U.S. Space Force Lt. Gen. Nina Armagno said, “It’s entirely possible they could catch up and surpass us, absolutely. The progress they’ve made has been stunning — stunningly fast.”

Furthermore, the Chinese government announced a goal of landing “taikonauts” on the lunar surface by the “end of this decade.” Also, last month, it revealed ambitious plans for its moon missions, including creating a space governance system and building infrastructure in space.

For what it’s worth, there’s an international treaty that addresses any potential territorial claims that China could make on the moon. It’s the United Nations “Outer Space Treaty,” created in 1967 at the height of the Cold War. It was designed to prevent the U.S., the Soviet Union, and other countries from colonizing space and creating a nuclear weapons base, per Insider.

However, as China has shown with its expansion into the South China Sea, international law hasn’t stopped it from illegally claiming territory as its own. Furthermore, the country has a lengthy list of human rights violations that break international law.

This includes its continued suppression of religious and cultural freedoms in Tibet. China invaded Tibet in 1950, killing over one million Tibetans — 20% of the country’s population at the time. The Chinese military also destroyed most of the country’s 6,000+ Buddhist temples.

Other human rights violations include accusations of genocide against Uyghurs in Xinjiang, with likely one million or more people imprisoned in state-sponsored “re-education camps.” Additional concerns include the potential invasion of Taiwan and the suppression of democracy in Hong Kong. China essentially helping fund Russia’s illegal invasion of Ukraine by being the biggest buyer of its oil and helping the country skirt international sanctions is a red flag too. 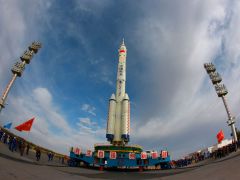 China Could Beat the US at the Space Race to Mars: Nuclear Reactor 100 Times More Powerful Than NASA Device

While NASA chief Nelson warns of China’s lunar ambitions, he believes that the U.S. will ultimately prevail in the space race to the moon. With the successful Artemis I mission, the U.S. is on track to return a human to the lunar surface by 2025.

However, Nelson cautions against any delays, with “little time to lose.” The U.S. is already a year behind the original target date of 2024. Also, while Congress recently approved the 2023 fiscal year budget for NASA, it’s less than what the space agency requested.

However, Nelson said that the budget still includes “key components for the next two moon missions, Artemis II and Artemis III.” The Artemis II mission, slated for the end of 2024, will send a crew into the moon’s orbit. And following Artemis II, the signature Artemis III mission aims to land astronauts on the moon by the end of 2025.

There is the potential for delays, though. The successful timeline is primarily dependent on two things, according to Nelson: “The space suits, are they ready? And is SpaceX ready?” NASA’s moon missions utilize rockets from Elon Musk’s SpaceX.

NASA veterans also express concerns about Chinese lunar ambitions. This includes Terry Virts, former commander of the Space Shuttle and International Space Station. He said, “There is potentially mischief China can do on the moon. If they set up infrastructure there, they could potentially deny communications, for example. Having them there doesn’t make things easier. There is real concern about Chinese meddling.”

When directly asked by Politico if he believes the U.S. will put astronauts back on the lunar surface before China, NASA chief Nelson replied, “The good Lord willing.”