The small SUV class is hyper-competitive. Then, when you want to toss in a luxury nameplate, it gets even more competitive with every manufacturer trying to out-gun, out-fun, or out-pace each other. These are the SUVs you’re most likely to see in the pickup line at the local private school, or in the Trader Joe’s lot. But these SUVs offer the best from these five manufacturers, including lots of technology, speed, luxury and good looks, in a slightly larger package than their smaller cousins.

Which five do the experts at Edmunds say are the best for 2023?

A lot of people are still unfamiliar with the Genesis nameplate. Like Acura is Honda’s upscale brand, Genesis is Hyundai’s. Genesis made a huge splash in 2021 with the larger GV80, and the slightly-smaller GV70 aims to do the same. The GV70 packs a turbocharged four-cylinder, or a twin-turbo V that gives it some serious pace, and a luxurious interior that sets it apart from others on this list.

With the GV70, Genesis came to show other manufacturers that it can craft an SUV that for $45,000 has all the pace, and grace, of a much more expensive SUV.

Mercedes-Benz recently redesigned the GLC. Not that the old one needed much of a boost, as it was the brand’s best-selling vehicle ever. However, for 2023 it gets a mild 48-volt hybrid booster, as well as some cool tech and a styling upgrade. Unlike others on this list, the new GLC has a some off-road chops and features like a trail camera that help it stand out among the mall crawlers.

The new 2023 GLC should start appearing at dealers soon for about $45,000. But, even if you settle for a 2022, you’ll find the GLC more than capable. Edmunds ranked the 2022 version as the No. 2 SUV for 2023, and the reviewers will likely update the list after they review one.

The Acura RDX may not offer the plush leather or the nicer plastics of the Mercedes GLC, but that’s not this SUV’s mission. Instead, this SUV was designed to handle twisty roads and feel more like a tall sporty SUV. It’s quick, and with the A-Spec SH-AWD, which is Acura’s all-wheel drive system, it sticks to the pavement better than most. The dash looks complicated, and it has any number of buttons, switches and even a track pad to control the screen.

Let’s get the price out of the way on the Macan. At $59,000, it’s the most expensive SUV on this list. But Porsche’s best-selling vehicle packs more performance and more fun than the others on this list, especially when its equipped with the twin-turbo V6 in the S and GTS versions. Porsches have a distinct feel that caters to the driver, but passengers do get to see and feel the Macan’s premium materials.

We love the powerful S version with 434 horsepower, but that upgraded engine pushes the price of this compact SUV to about $70,000. 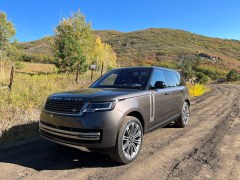 What’s the Best 2022 Luxury SUV According to Newsweek?

BMW’s X3 set the standard years ago. It got a small styling update for 2022, but remains a solid, practical, five-seater with sporting character. Sure, you can step up the M version and get a lot more power and performance that would embarrass many sports cars. It’s no Porsche Macan, but in the M40i version, you do get a 0 to 60 time of about 4.0 seconds.