The Honda Motor Company is one of the most iconic Japanese automakers. Located in Minato, Tokyo, Japan, the company is well-known for its innovation and engineering expertise in producing powerful, fuel-efficient vehicles. The company is also famous for developing excellent technologies and incorporating them into its cars to offer customers a remarkable experience.

Since its founding in 1948, Honda has produced historic vehicles with cutting-edge technologies, manufacturing premium and entry-level cars, contributing to its popularity. So, what does the name Honda mean?

Honda has come a long way from humble motorcycle beginnings

The Honda tale began in the years following World War II when Soichiro Honda decided to restart his engineering endeavors after the war destroyed his prior businesses.

Bicycles were a popular form of transportation in 1946, and Soichiro Honda recognized an opportunity to motorize them. Soichiro altered the wireless radio generator engines used by the Imperial army of Japan to serve as an auxiliary power source for bicycles.

Honda has been the largest motorcycle manufacturer in the world since the American Honda Motor Co., Inc. was founded in Los Angeles, California, in 1959, according to Rewind & Capture. Honda continued to expand, entering the automobile industry in 1963 with the release of its first vehicle, the Honda T360 mini-truck, followed by the S500 sports car.

Soichiro Honda started the Honda Motor Company, naming it after himself as was common practice at the time, followed by Henry Ford of Ford Motors, and Kiichiro Toyoda of Toyota Motors, among others. Britannica highlights that the Honda Technical Research Institute was established by Honda Soichiro in 1946 to create compact, effective internal combustion engines.

However, Honda stands for more than just Soichiro’s name. It also means “original rice paddy” in Japanese, which has worked well for the business because it is memorable and straightforward.

Honda makes several different models, but its iconic designs, such as the Accord, Civic, and Odyssey, propelled the carmaker toward gaining the public’s trust. This confidence results from its track record for creating durable, reliable, efficient, and fashionable automobiles.

The Honda logo is a capital H that usually has an odd shape. The H is derived from the initial letter of Soichiro Honda’s second name, the company’s founder. The company slogan “Yume No Chikara,” which translates to “Power of Dreams,” was created in the 1940s. Honda eventually adopted this adage as its motto, which perfectly sums up the company’s operations.

Over time, the Honda logo has changed. The original Honda car badge had a red rectangular logo with a stylized capital “H” and vertical bars in the top portion of the badge.

The Honda N600 is the first car the company sold in the U.S. 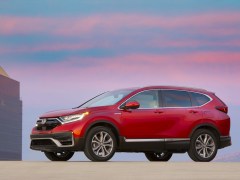 The N600 was the first ever Honda passenger model to be sold in the U.S. Since its arrival to the country in 1959, Honda has been known for its reliable motorcycles. Its success in Formula 1 and its line of small-displacement rear-drive roadsters, which made the brand well-known throughout the world, has largely gone unnoticed in the United States. However, anyone interested in the automotive industry is bound to notice that Honda always takes its own unique path.

The first iteration of the Honda N600 was the N360, built with a 360cc twin-cylinder air-cooled engine for simplicity and ease of maintenance, drawing inspiration from the original Beetle. In 1969, the production version was issued following the collection of test data, outfitting the vehicle with a larger, 600cc version of the twin-cylinder engine to expand the business.

The N600 was released during the 1970s oil crisis when American cars were getting bigger and more fuel-hungry. Because of the compact automobile’s fuel-efficient engine, American households were made aware that they could possess a vehicle without losing power or size. The company’s performance has made Honda one of the leading automakers in the United States.