The Ford Ranger is a mid-size truck that has long been offered by the Blue Oval. After a hiatus here in the United States, it returned in 2019, giving consumers another option in this segment. Now, what’s important to note, is that we got the fourth-generation Ranger. Meanwhile, most of the world is enjoying the fifth-gen Ranger. And that might be why Ford’s mid-size truck is near the bottom of the segment for Q3 of 2022.

Is the Ford Ranger worth buying?

With a starting MSRP of $27,400, the Ranger might be a mid-size truck worth buying. It can tow up to 7,500 pounds, seats five passengers, and it comes with a turbocharged engine. The problem might come from the fact that it is the previous generation, at least here in the States.

In other places of the world, consumers are enjoying the fifth-generation Ford Ranger. This pickup truck is built on the T6.2 platform. And it is not yet available in the United States. At the same time, it will be coming in the near future. So folks interested in a new Ranger might be holding out to get an updated truck.

The Ranger isn’t doing so hot

According to Ford Authority, when compared to Q3 2021, sales of the Ford Ranger in Q3 2022 are down about 13%. Just over 12,000 units of this mid-size truck have been sold. And that is less than rivals from other truck manufacturers.

Both the Toyota Tacoma and Chevy Colorado sold quite a bit more than the Ranger. Considering how popular Ford’s larger truck, the F-150 is, those numbers might tell a confusing tale.

Outside of the Ford Ranger, sales of mid-size trucks across the board actually increased in the third quarter. And that means that this Ford pickup underperformed when compared to the competition.

Although rumors have circulated that the 2023 Ranger will mark the next-gen of this truck, it is not coming until 2024. At that point, we will get the fully updated version of Ford’s mid-size truck. And that will likely breathe new life into this vehicle. 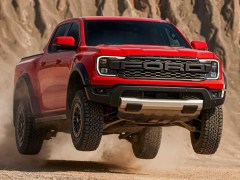 With a redesigned Ranger right around the corner, some consumers might be waiting until they head to a dealership to get a pickup truck. And honestly, I can’t blame them.

The 2024 Ford Ranger will likely have a Raptor trim and a new engine. It can also be expected that this truck will have an updated design, both inside and out. So maybe it is something that is worth waiting for.