Federal 2023 tax credits for electric vehicles are super confusing. Some cars qualify, others don’t, and some do in only some trim levels or with certain options. For example, the seven-seat Tesla Model Ys qualify, while the five-seaters don’t. How can you figure out which vehicles qualify for a vehicle tax credit on the new 2023 list?

What is the electric vehicle tax credit for 2023?

If you buy some new vehicles after Jan. 1, 2023, they may qualify for a tax credit. The tax credits are a huge boon to keeping electric, fuel-cell, and plug-in hybrid vehicles affordable. Most of these cars and SUVs are, after all, premium vehicles, like the expensive Rivian R1T truck R1S SUV.

To qualify for the federal $7,500 tax credit, however, the IRS says you need to meet several criteria. The vehicle must be for personal use in the U.S., you can’t make more than $300,000 annually filed jointly, or $150,000 individually, and the vehicle has to qualify. More on that below.

What vehicles qualify for a 2023 federal tax credit?

There is a long, and slightly confusing, list of criteria that a new vehicle has to meet to be eligible for a vehicle tax credit for 2023. The basics, though, include a battery of at least 7 kWh, a gross weigh of less than 14,000 pounds, and critically it has to be made by a qualified manufacturer. They also must “undergo final assembly in North America.” That means that many popular EVs, like the Hyundai Ioniq 5, won’t qualify.

Is there a list of vehicles that qualify for the tax credit?

At the beginning of 2023, the IRS posted its new list of vehicles that qualify. The IRS does have a list. Most every manufacturer you can think of, from Audi to Volvo, has a car on the list. However, some like Toyota, Mercedes-Benz, Mitsubishi, and Jaguar Land Rover, which all make vehicles that should qualify, don’t. they have not submitted their final requests.

Many of these manufacturers, like Rover, which builds most of its cars in England, or Mitsubishi, which builds the Outlander in Japan, don’t meet the made-in-North America rules for the 2023 tax credit. However, there are some surprises, like the Audi Q5 TFSI e Quattro PHEV, and Volkswagen ID.4.

There is some confusion about what vehicles qualify 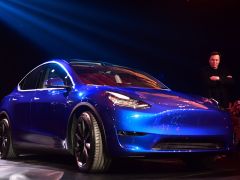 The Volkswagen ID.4 is considered an electric car, except when it’s an SUV. The ID.4 in two-wheel drive trim qualifies, but it has a $55,000 price limit. If you add all-wheel drive, suddenly the IRS considers it an SUV or truck and it has an $80,000 price cap. While Ford (and MotorBiscuit) calls the Ford Escape plug-in-hybrid and the Lincoln Corsair PHEV SUVs, the IRS doesn’t.

The confusion has hit Tesla hard. Tesla’s Model Y, like other tall EVs with extra space, most consider an SUV.  However, if you buy the Model Y in the five-seat variant, it’s a car with a $55,000 price cap. Add the third row, however, and suddenly it’s an SUV, according to the IRS. The Model Y as a five-seater had been removed from the list, but now it’s back on.