The IRS has released its entire new list of electric vehicles that are eligible for the federal EV tax credit for 2023. Almost every EV you can think of is on the list, except the five-seat Tesla Model Y SUV. It must have been a terrible week to be an accountant at Tesla. What happened to the Model Y tax credit?

The Tesla Model Y is an SUV, except when it isn’t (and that means no tax credit)

According to Inside EVs, the IRS only considers the seven-seater version of the Model Y an SUV, while the five-seater version (which looks identical) is just a car. An SUV qualifies for the tax credit, while the car does not. It comes down to prices, but more on why prices matter later. Also, the IRS doesn’t seem to use traditional automotive vehicle classifications for the tax credits, and many vehicles that we consider SUVs, it doesn’t.

The list is confusing, to be sure. Other SUV-like vehicles, think of the competing Mustang Mach-E, are considered cars. But the similar-looking VW ID.4 is considered an SUV with all-wheel drive. Neither, though, come as seven-seater like the Model Y. While some have said (on Twitter) the classification comes down to the weight of the Model Y, there doesn’t appear to be any weight limit listed in the IRS regulations.

There is an upper limit on the cost of cars and SUVs that get the tax credit. The upper limit for cars is $55,000, while it’s $80,000 for SUVs. That’s one reason the Model Y was ejected as a five-seater. The limits are, presumably, there to encourage lower-priced EVs. Tesla’s Model S starts at more than $100,000 and the X at $120,000, so they are too expensive to qualify.

What is the Tesla Model Y?

The Tesla Model Y is an all-wheel drive all-electric SUV that fills the gap between the Model 3 car and the large, and expensive, Model X SUV. The Model Y in long-range all-wheel-drive trim gets 330 miles on a charge, while the base version has a 279-mile range. With its two motors, the Performance version can go from 0 to 60 mph in about 3.5 seconds, according to Tesla.

Though the Model Y has reigned as the midsize, near-luxury, SUV to beat, Ford, Chevy and Hyundai are all going after the segment. The new Hyundai Ionic 5, MotorBiscuit’s EV of the year, packs similar performance in a stylish package that costs about $20,000 less. The Ford Mach-E and the upcoming electric Chevy Blazer are both aiming to steal some of its sales, too. 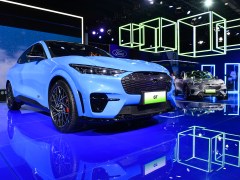 Could This Be the Best Electric SUV You Can Buy?

Of course, in a Tweet, Elon Musk is now asking people to comment on the EV tax credit qualifications. He sent a link to the IRS’s comments page.