Off-roading is cool, and VW is looking for ways to show that its new ID.4 all-electric SUV can be cool, too. It’s created a new off-road version of the fun VW D.4 that ditches that regular SUVs dowdy lines and jacks them up to create an EV that looks like it can take on the next stage of a rally. Could this beefier concept preview a new ID.4 SUV?

Volkswagen calls this the ID.XTREME an off-road concept car

VW answered the question that nobody was asking; What happens when you turn an electric commuter SUV into a beefy off-road runner? The basics are simple, VW added a “performance drive” on the rear axle and adjusted the car’s software to give this all-wheel drive EV crossover off-road ability. The improvements added 87 horsepower, to a total of 382 horsepower.

The new system and tweaks to the software mean that this crossover concept can now accelerate from 0 to 62 mph (or 100 kph) in 5.3 seconds. That’s more than three seconds faster than the stock ID.4 in rear-wheel drive trim. The new ID.XTREME is also 30mm higher, 20mm wider, and it has 18-inch wheels. In some ways it echoes VW’s EV Baja racer.

But, for an off-road vehicle designed to ford water and mud, VW missed the obvious pun in this concept’s name: why not call it the X-STREAM instead of XTREME?

Can the regular ID.4 go off-road?

Any car is an off-roader if you’re off road. But, the ID.4 is not specifically designed to go off road, even though it is available with all-wheel drive. The base ID.4 starts at $37,495 and comes as a rear-wheel drive crossover. The step up to all-wheel drive requires the ID.4 AWD Pro trim, which starts at $46,295. The Pro is nearly as quick as the new ID.XTREME, with a 0-60 acceleration time of 5.7 seconds.

This crossover is designed to get five people to and fro in comfort, not to bomb the nearest fire road. It has a very car-like 6.7 inches of clearance, which won’t be of much use on the trail. But, it’s plenty for getting around town. Though the stock car has a range of about 260 miles, or 324 for the upgraded ID.4 Pro, VW didn’t give range specs for the new ID.XTREME concept.

What parts of the new ID.XTREME could come to the ID.4? 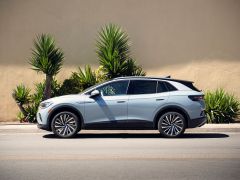 The 5 Cheapest Electric SUVs and Crossovers You Can Buy Today, and One That’s Coming

Concept cars like the ID.XTREME often preview new features that designers are considering for the next versions of a car. In this case, it seems like VW is testing new interior goodies. It could possibly use it to upgrade the GTX appearance package, or maybe the ID.BUZZ van. However, AutoWeek points out that since the ID.4 is made in Tennessee, VW could make a marekt-specific ID.4.

In the ID.XTREME, the center of the rear seat was removed to accommodate a fold-through hatch. In front, VW added a fixed console and some different trim. VW also used the concept to show off its ability to change the sound to fit its character.