Ferrari’s new Purosangue took a lot of guff when it was announced. Ferrari, the purists said, should not build a giant SUV just because Lamborghini did. Well, Ferrari didn’t. Instead, the new Pursangue is an SUV, but not like any other SUV you’ll see on the road, probably ever.

Ferrari knows its heritage and made sure that its first SUV will have the power, handling, luxury, and technology that its customers demand. Too bad it’s sold out of Pursangues.

The new Purosangue has a V-12

Ferrari purists probably took a big sigh of relief when they found out that, one, the Purosangue would have a version of the brand’s iconic 12-cylinder engine and, two, that Ferrari was still making V-12s. The V-12 engine is a hallmark of Ferrari performance cars thanks to its ability to make lots and lots of smooth power, in this case 715 horsepower according to Ferrari. Ohh, and did we mention how it sounds? Bellissimo.

It carries on a long 2+2 tradition at Ferrari

Sure, most of us had posters of the Ferrari’s iconic two-seater cars on our walls as kids, like the Testarossa or the Enzo. But, Ferrari has a long tradition of making cars it calls 2+2s for their ability to seat two in the front, and two people in the back, comfortably. With cars like the iconic 330 GT2+2, the Mondial and the GTC4, you could take three of your friends along for a thrill ride.

When we think of a supercar, we often think of the engine sitting in the middle of the car, behind the driver for perfect balance. But in the Purosangue, that’s where its hatchback, people and luggage will go. So, Ferrari pushed the V-12 as far behind the front axle as it could to create a front mid-engine car. That means that the back of the engine is right up against the firewall in the cabin, allowing you hear everything the engine doing.

The new Pursosangue is aerodynamic

Any sporty car needs to cut through the wind, and the Purosangue is no different. Most SUVs are big bricks pushing aside air with brute force. But with the Purosangue, Ferrari used tricks from its racing cars to create funky air curtains around the wheels that seal off turbulent air. It’s one way the Purosangue can differentiate itself from its rare-air competition.

It has “suicide” doors in back

Not since giant Lincoln land yachts of the 1960s have we seen suicide doors on the back of a production car in the U.S. Sure, there have been funky attempts like the RX8 and the Honda Element. But backwards-hinged doors remain a rare feature that only special, and rare, cars have. In a car with a tight back seat, like the Purosangue, they make sense and make it easy to get in. But these doors are a first for Ferrari. 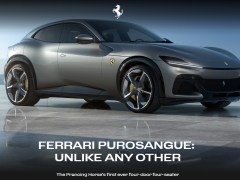 Ferrari Insists It’s Not an SUV, but the Ferrari Purosangue Is the Brand’s First SUV 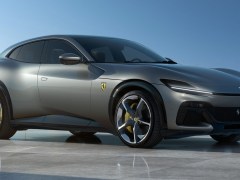 This is a big SUV, for a Ferrari, and the company had to pull out every trick it could. For example, the Purosangue has an active suspension system that uses accelerometers and position sensor on each corner of the car. Those sensors interact with the brakes and suspension, along with the all-wheel drive and all-wheel steering, to help the car get around corners. It also has the next generation of an electronic differential and eight-speed automatic to harness the power.