When you’re trying to haul the whole fam damily, sometimes you just need a third row of seats. Unlike small SUVs with third rows whose third-row seats are for emergency use only, these five have room for real people in back. These midsize SUVs make hauling the family easy, and in some cases downright fun, that’s why Edmunds picked these for 2023.

What is a midsized three-row SUV?

All of the three-row SUVs on this list start at or below $40,000. Though nobody will say that’s cheap, these all come with dozens of family-friendly features like seating for seven or eight, multiple charging ports, and cupholders, and driver’s aids to keep you safe. All have optional all-wheel drive, too. So which SUVs did Edmunds decide were the best for 2023?

The Kia Telluride checks many boxes for SUV buyers, so it’s no surprise it’s on top of this list. It tows 5,500 pounds, it has a powerful V6, it a lot of cargo room, and it looks good. For 2023, the Telluride got a huge styling upgrade that only added more to this three-row SUV. Speaking of that third row, it has room for real adults back there, too.

The Kia Telluride starts as a relative bargain, too, with a base price of about $37,000. That means that the upgraded SX and EX packages, and the special X-Line or off-road biased X-Pro versions, for about $50,000 pack in a lot of features that were previously relegated to luxury SUVs.

The Palisade is a Kia Telluride, just with different styling. While the Telluride has more street style, the Palisade leans more towards traditional SUV buyers. But, all of the stuff that makes the Telluride good translates directly to the Hyundai.

Honda completely redesigned the Pilot for 2023 and we can’t say that it didn’t need it. The new Pilot washes away the melting-soap bar looks of the old one and replaces it with traditional SUV two-box styling. The new Pilot also gets a stout 285-horsepower V6, and in several new trims like the Trailsport, that add some off-road abilities. It’s also larger inside and out.

The Honda Pilot’s price got a revamp for 2023, too, increase to about $40,000. But, the new Pilot offers a lot more than, including spacious third row that gives the biggest Honda seating for up to eight people.

Unlike the others on this list, the biggest VW hasn’t changed much since it was launched in 2018. But, when it came out the Atlas was state-of-the-art and it still manages to look sharp and compete. It’s base 235-horsepower turbo-four doesn’t have the grunt, but with the optional 276-horsepower V6, it can keep up. Inside, this SUV is positively cavernous and holds more than others on this list. Also, VW’s materials and options make this feel like a premium SUV

While the base version starts at about $37,000, the SEL and other top trim packages add the goodies we all want. Interestingly, VW includes a trailer hitch standard on every V6 Atlas, which hints at this SUVs capability. 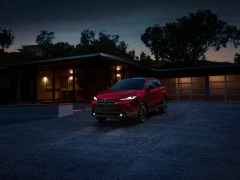 The 5 Best Midsized SUVs for 2023, According to Edmunds

When you need three rows, but don’t to feel like you’re driving a massive SUV, the CX-9 fits the bill. The CX-9 isn’t as large as others on this list, and it’s not as capable off-road. But, it’s fun and stiffly-sprung, if not exactly quick. The CX-9 also packs in premium materials,  and clever features like a fold-flat load floor. We’re looking forward to the 2024 plug-in hybrid version, too.

All CX-9’s have a turbocharged four, while the CX-5 and others get a more powerful turbocharged engine. Regardless, even the base $40,000 CX-9 Touring package is well equipped and there’s not much need to step up to a more expensive trim level. All CX-9s come standard with captain’s chairs in the middle, however the Touring Plus version has a three-seater bench in the middle.