We all need a little extra space sometimes, and a third row often fits the bill. But, giant full-sized SUVs like a Tahoe or an Expedition are just overkill for what most of us need. Plus, they’re a bear to park. So, for many of us, a small three-row SUV fits our needs and for 2023 these are three that the reviewers at Edmunds recommend.

The smallest three-row SUVs provide a lot of utility, and all of these SUV’s start at less than $30,000. While the way back seats in this class don’t offer a lot of room, they’re all great for occasional use or for kids. They all offer driver’s assistance aids, plenty of power, and of course luggage room when the third-row is stashed. It makes sense that Edmunds, a review site, would name these three the  best for 2023.

The Kia Sorento packs in a lot of value and style in this segment. It’s easy to write off a three-row SUV as a mommy-mobile, but this one has an aggressive front end and street style that gives it some cred others don’t have. For 2023, Kia added more to the Sorento’s driver’s assistance systems, like blind-spot alerts and rear cross traffic collision avoidance. Like others on this small three-row SUV list, leave the adults out of the way back.

Though the LX version starts at $29,990, the S and EX trims offer more of what most want. The EX adds including larger screens, wireless charging, and automatic wipers for $32,490.

The Mitsubishi Outlander was redesigned in 2022 and Mitsubishi is hoping it has a sales hit on its hands. A lot has been made of the very cool plug-in hybrid version, which has 38 miles of electric range. But the non-hybird version is a huge step up for Mitsubishi. On a recent trip to drive an Outlander, MotorBiscuit found the Outlander a capable, nice-driving, SUV that is finally large enough and powerful enough for American roads.

Though the Outlander has a third row, it’s really for occasional use for two people and not recommended for full-sized adults. The Outlander has a clever all-wheel drive, too, that allows the SUV to perform more like a rear-wheel-drive SUV, which (trust us) is fun in the mud. The outlander starts at $27,595, but the upgraded SE trim for $30,645 offers the stuff most of us want, like heated seats, multi-camera views, and a larger screen. 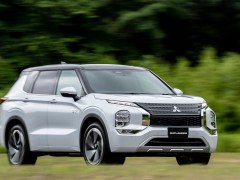 Can the New 2023 Outlander PHEV Recreate the Success of the Last One?

The Volkswagen Tiguan slots between the smaller Taos and the larger Atlas, and for many, it’s the perfect size. Its third row is great for occasional use, and when it’s folded the generous cargo area helps hold a generous amount of luggage. The VW adds a splash of modern European design that the others on this list don’t have, especially in the sporty R-Line trim. Like the others, it also offers driver’s aids, a large screen, and more. IQ.Drive offers even more to make driving easier.

The Tiguan starts at $26,950 and even base models have heated seats, blind spot monitoring, and keyless entry. Stepping up to the $30,580 SE version adds app connectivity, dual-zone climate control, and leatherette seating.