As an SUV, the 2023 Subaru Crosstrek is surprisingly affordable. With a starting MSRP of just $23,645, you get things like standard all-wheel drive and 8.7 inches of ground clearance. Because of that, the Crosstrek is a vehicle that is ready for adventure. And you don’t have to pay as much as you would for something like a Jeep Wrangler.

Why is the Crosstrek so popular?

It’s clear why the Subaru Crosstrek is so popular, it is both affordable and capable. With a starting cost of under $25k, it’s a solid option for somebody that’s on a budget. And even though the starting MSRP isn’t too high, you still get a rugged vehicle. Thanks to things like standard AWD, the Crosstrek is ideal for handling inclement weather and some adventuring.

That said, the 2023 Subaru Crosstrek is not an SUV for heavy-duty trail life. Unless you intend to make some major modifications, it feels more at home on the pavement.

The 2023 Subaru Crosstrek still has a manual transmission

In the modern world, finding a new vehicle with a manual transmission is kind of a difficult task. And if you want an SUV with a standard transmission, it will be even harder. But, the 2023 Crosstrek still offers the ability to row your own gears. The fact that you will also get AWD is just the cherry on top.

To be frank, most Crosstrek models probably won’t be sold with a manual transmission. Most folks prefer the simple operation of something like a CVT. It is nice that Subaru still gives the option; it will likely disappear once the next generation of Crosstrek is here.

Is Subaru coming out with a new Crosstrek?

There is a new Subaru Crosstrek, but it’s not for sale in the United States yet. For the 2024 model, the Crosstrek will enter its next generation here in the States, and it does look pretty good. Subaru has made its small SUV look more aggressive, which is certainly welcome. 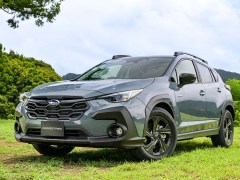 Subaru Just Dropped the 2024 Crosstrek, and It Looks Great

The new Crosstrek will be fairly similar to the old generation. But it does look like Subaru has improved the seat design, which might mean more comfort. According to Car and Driver, it’s not clear what kind of changes will be made under the hood.

Recently, Subaru did give a more powerful engine option. Even though you can’t get it with the six-speed manual transmission, it is nice to have something that does not feel so lethargic. One of the major complaints about the Crosstrek is that it felt underpowered.

This Subaru SUV deserves your attention

There is no shortage of new SUVs on the market. But the 2023 Subaru Crosstrek does bring quite a bit to the table. With its standard AWD system, active safety features, and likable design, the Crosstrek does seem like a real winner.

Perhaps the biggest perk of the Crosstrek SUV is its price. The base model is fairly affordable, but if you want to hop into a better trim, expect to pay more.