It doesn’t make sense. Why do the new model year cars all come out in September or October? We’ve been seeing 2023 new car models for several months now, even though the calendar just flipped to the new year. It turns out farmers have a lot to do with why new and redesigned cars and trucks come out in the fall, as well as Franklin D. Roosevelt, the weather and TV schedules.

The fall is when farmers would sell crops and have cash

Today’s economy is so different from the one that the automobile grew up in. According to The Detroit News, manufacturers initially started rolling out new cars models in the fall because that’s when farmers were flush with cash after selling their produce. Farmers would have cash and salesmen would do their best to find a farmer fresh from the market with hundreds of dollars in their pockets. That’s when it made sense to bring out flashy new models.

But also, Franklin Roosevelt in the 1930s signed an executive order that made automakers release their cars in the fall. His thinking was that because there’s usually an idle time at a manufacturing plant as the tooling for new cars is installed, that idle time should be in the spring or summer. He wanted workers to stay employed during the holidays, yet have time for a summer road trip vacation.

TV schedules and the weather made it convenient

When manufacturers started making cars, think of the original Ford Model T assembly line, factories didn’t have heating. Many of the early car manufacturing companies had factories in Detroit, Mi. and we don’t have to tell you how cold Michigan gets in the winter. So, car companies simply made all of their cars during the spring summer and fall, which meant in the summer of 1915, for example, they had to make 1916 cars. Then, they would send the cars to dealers in the fall.

After World War II, manufacturers informally decided that Oct. 1 would be the start of the new model year. Often, dealers would hold massive events on Oct. 1. Also, according to The Detroit News, in the 1950s, 60s and 70s, the new models coincided with new TV shows that were debuting in the fall. Those TV shows gave automakers a prime-time way of advertising their new cars to millions. 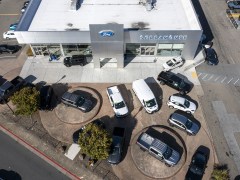 Wall Street Journal: Wait Until the Fall to Buy Your New Car or SUV

Since the cars come to dealers in the fall, that usually means that previous-year leftovers are cheaper. No dealer wants to have a leftover 2022 car or truck on the lot when they could sell a new 2023 version at a premium price instead. That means that you can often find a better deal on a new car that’s simply one model year out-of-date in the fall.

Also, auto dealers ramp up year-end sales in the fall so they can meet their annual sales quotas or goals. That means they’re more willing to deal at the end of the year than the beginning when there’s less pressure.