Despite the massive Toyota pickup trucks we see in droves here in America, Toyota is a Japanese company. The majority of the vehicles Toyota produces are made in Japan. A large number of pickup trucks are now made in the States. The state of Toyota production can be a little confusing, but fear not; we are here to help. So, where are Toyotas made?

Are Toyotas made in Japan?

Toyota makes an impressive 10 million vehicles a year. If that sounds like a lot, it’s because it is. Hell, the Toyota Corolla has sold 50 million units on its own since the introduction of the model. In order for Toyota to keep up with production figures like that, the automotive powerhouse must employ multiple massive production facilities all around the globe.

According to Casual Car Guide, Toyota’s headquarters is in Aichi, Japan. As of this writing, Toyota has 16 production facilities across Japan. Nine of those facilities are in the city of Toyota, Japan. If you wonder how important Toyota is, just look at the fact that it has its own city named after it.

Although Toyota has production facilities worldwide, most of its cars are still made at home. The models made in Japan are the Corolla, RAV4, Camry, Prius, and Yaris. Japan is still the world’s largest exporter of Toyota vehicles.

However, the largest Toyota plant is far from home.

Are Toyotas made in America?

The largest Toyota plant is in Georgetown, Kentucky. It employs over 9,000 people and builds the Camry and most new Lexus models. Although the Kentucky plant is the largest, Toyota still has 13 other manufacturing facilities where Toyotas are made. The newest American Toyota plant is in Huntsville, Alabama. This facility is a joint effort with Mazda and opened in 2021.

Where are Toyota pickup trucks made?

The Toyota Tundra and Tacoma are made in San Antonio, Texas. The estimation is that roughly every 60 seconds, a Tundra or Tacoma rolls off the assembly line. In 2020, this facility built 170,105 trucks.

Are Toyotas made in Europe?

Where are Subarus Made? 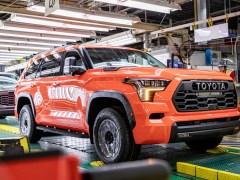 Toyota: The New Sequoia Is Now Being Made in Texas

Making 10 million cars a year requires many hands, and Europe is in on the Toyota production too. Toyota makes cars in France, Belgium, Russia, the Czech Republic, Turkey, and the UK. However, these are only a few of the European countries where Toyota has set up camp.

The Toyota Supra is made in Austria in a plant that also builds BMWs, Jaguars, and Mercedes-Benz.

Is Toyota a Japanese company?

Despite the worldwide effort needed to keep up with Toyota’s production, the legendary brand is still very much a proud Japanese marque. The Toyota Motor Corporation is the controlling entity, yet Toyota makes cars under various brands like Lexus, Daihatsu, Hino, and Ranz.