Ready to go to Wally World? Some movie cars are iconic because they’re awesome, like the Lamborghini Countach in Cannonball Run, or the black Porsche 911 Turbo in Bad Boys. But some stand out because they’re awful, like the Clark Griswold Family Truckster station wagon in “National Lampoon’s Family Vacation.”

And, in the immortal words of the car’s salesman, “If you think you hate it now, wait ‘till you drive it.”

What was the car in ‘National Lampoon’s Family Vacation’ based on?

The car that became the famous Wagon Queen Family Truckster is based on an early 1980s Ford LTD wagon. At the time, the LTD in Crown Victoria trim was Ford’s top-of-the-line wagon, and it would have had the same kind of street cred that an Expedition would have today. Though maybe not in green.

It’s hard to believe, but giant station wagons not that long ago were cool (well, coolish) cars. But these giant land yachts were the precursors to today’s giant SUVs and crossovers that hold eight people in comfort. Maybe the Family Truckster had something to do with the wagon falling out of favor?

Fun fact: a replica of one of the original movie cars sold for about $40,000 at a Barrett-Jackson auction in 2020.

To turn the LTD into the Family Truckster, the movie folks had to dress it up and, probably much to Ford’s delight, cover up all of the Ford blue ovals. The car got at least 10 fake wood panels, a giant grille, roof rails, and, well, gills on the back below a gold crown. And, it came in “metallic pea” color.

The Wagon Queen Family Truckster was a far cry from the blue sports sedan that Clark Griswold ordered. Even his family was stunned when he drove up in the car for the first time. Though it seems terrible, it did get the family to Wally World, despite several wrecks and some off-roading action. No spoilers here, though.

Fun Fact: Audi made a weird concept version of the Truckster on a modern SUV.

What was a Ford LTD wagon?

The 1983 Crown Victoria Wagon was the most expensive version of Ford’s full-size car, the LTD. It was $10,253, which was only few hundred dollars more than a Mustang GT 5.0. But it had seating for 10 people, who sat on Dura-Weave vinyl upholstery. It had an AM/FM radio, a cassette deck, a power front seat, and power windows. Like many of today’s full-sized SUVs it, too, was a body-on frame design that was based on a truck chassis.

In 1983, you could order the same basic car in a two-door version, a four-door version, or a wagon. But only the wagon had two giant fake wood panel stickers running the length of the car. 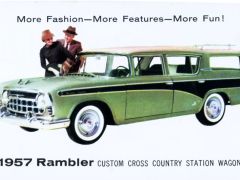 In the third installment of the Vacation series, the then-new Ford Taurus wagon made an appearance.

And, of course, a Ford wagon plays a major role in the Christmas sequel, “National Lampoon’s Christmas Vacation.” Again, it has fake wood paneling, but the Taurus was an all-new car for Ford at the time, and it was a huge success, even if the “metallic pea” color wasn’t available. The Wagon never sold as well as the four-door sedan, but the name and the car were so successful, Ford renamed its Five Hundred Sedan the Taurus in 2008, hoping to boost sales.