The United States Postal Service is an agency that nearly every American relies on. And for the longest time, deliveries have been made with the Grumman LLV mail truck or other fleet vehicles. But soon, a new delivery vehicle will be showing up at your door, and that is the Oshkosh Next Generation Delivery Vehicle. By 2026, all Oshkosh NGDVs are expected to be electric.

The Oshkosh Corporation is the company that won the contract to make the new electric mail trucks. Known as the NGDV, Oshkosh Defenses earned the contract in 2021. But, things got pretty complicated soon after USPS placed an order for its new mail trucks.

Initially, the majority of new mail trucks were ordered with a traditional combustion engine. And that happened even though President Biden had issued an executive order to push government agencies to embrace electric vehicles.

After so legitimate pushback, the Postal Service upped its order of EV mail trucks. And now, according to the USPS, the agency will have one of the largest electric fleets in the nation by 2028.

The USPS is exploring a whole fleet of electric mail trucks

By 2028, 45,000 mail trucks will be electric. And, Oshkosh NGDV trucks delivered after 2026 will be all-electric. Doing this should help the USPS cut down on its environmental impact, and it shows that EVs are capable of doing legitimate work.

Because most mail trucks operate on a specific route, it makes sense to embrace electric technology. They do not really drive all that far, and after the route is completed, they can be plugged back in to charge.

Now, making USPS fleets all-electric does come with some logistical challenges. Post offices will need charging infrastructure, which does not come for free. The total investment in going electric is expected to be $9.6 billion, and $3 billion of that will be coming from the Inflation Reduction Act.

Although that doesn’t sound cheap, these improvements will have their benefits. And they show that the Postal Service is willing to change in order to be better for the environment.

What will happen to the Grumman LLV?

The Grumman LLV has faithfully served the USPS and its customers for years. It is an icon on American roads, and the LLV has certainly lasted longer than it was originally intended to.

Now, some folks might be interested in buying a USPS mail truck, and the retirement of the Grumman LLV might help with that. Sometimes, these vehicles can pop up at auction, and honestly, they are not all that expensive. 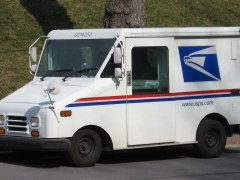 The Grumman LLV Is an Iconic USPS Mail Truck

If you do want to buy a mail truck, there are some important things to know. Mainly the fact that the Grumman LLV is purpose-built. It lacks creature comforts, is not all-wheel drive, and you can get in trouble if it seems like you are impersonating a mail carrier.

But, for a certain person, owning a part of USPS history might be worth those sacrifices. I know with my fascination of all things USPS, I would not mind seeing my very own Grumman LLV sitting in my driveway.