The Tesla “Autopilot” system is still wreaking havoc on public roadways. Despite some safety updates and dozens of Autopilot crashes, some people simply can’t resist acting a fool.

15 minutes after German police initiated a traffic stop on the Autobahn, they realized the Tesla driver had his seat reclined and was asleep as the car drove down the road.

Another Tesla autopilot user was caught asleep “at the wheel”

According to CarScoops, around midday, German cops spotted a “driverless” car cruising down the highway. To the car’s credit, police attempted to rouse the sleeping driver for over 15 minutes while the Tesla stayed at a steady 68 mph. The police used horn blasts and sirens to wake the driver, but it still took some time. I guess that’s a feather in the cap of Tesla’s soundproofing.

According to the police press release, first obtained by Teslarati, “Officers found that the Tesla driver was reclining in the seat with his eyes closed and his hands off the steering wheel. This strengthened the suspicion that he had left the controls to the Autopilot and had fallen asleep. After about 15 minutes, the man finally woke up and followed the instructions of the police.”

The same report mentioned that the police had suspensions that the driver was possibly under the influence of some drug. Although, the authorities believe it could have simply been a reaction to a new medication.

However, that doesn’t explain why the driver’s seat was reclined and why a safety defeat device was found in the car.

Despite Tesla’s Autopilot system being described as “full self-driving,” Tesla says drivers must keep their hands on the wheel and eyes on the road. Seems a bit misleading, eh? As such, Tesla has safety features that will disable the Autopilot if drivers take their hands off the wheel or in the cabin camera notices a lack of eye contact. However, it has been proven repeatedly that a simple steering wheel weight can trick the system. This german driver had one of these weights in his car.

Given the evidence that the driver was intentionally tricking the system, the German authorities have suspended his license. These situations continue to happen fairly regularly, stoking arguments that Tesla’s Autopilot systems are dangerous and a public nuisance. It’s one thing to choose to let your car drive you around and endanger yourself. However, it is another thing entirely to subject other drivers to a half-cocked technology that is being tested and continuously developed on public roadways.

At least no one was hurt 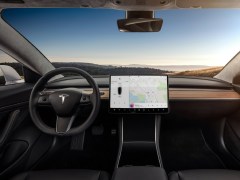 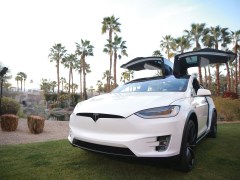 As the CarScoops article points out, the car did keep manage to do its task safely this time. Despite the negligence of the driver, that is noteworthy. However, just because it works well sometimes doesn’t make it better for those who lose loved ones when it doesn’t work.