With the Ford Maverick and Hyundai Santa Cruz, the small truck wars are in full swing. The Maverick is an extremely popular compact pickup, and it is so popular that the Blue Oval is actually struggling to keep up with demand. Despite the high volume of small trucks being sold, some brands are notably absent from the fray. One of those is General Motors, more commonly known as GM.

Currently, GM does not offer a direct rival to the Ford Maverick. The company is offering a small truck known as the Chevy Montana, but it is not coming to the United States. If GM is planning to make a compact pickup, it is being pretty quiet about its intentions.

But, according to GM Authority, General Motors is benchmarking the Ford Maverick truck. Benchmarking is essentially when a brand tests another brand’s vehicle, and it is an extensive process. The process typically involves going over mechanics as well as the overall driving experience. So, maybe GM is hoping to build a small truck.

The smallest GM trucks that you can buy today are the GMC Canyon and the Chevy Colorado. Those mid-size pickups have both gotten serious updates for 2023, and frankly, it’s hard not to picture them being successful.

But, if you want an actual small truck that’s new, you’ll need to look to Ford and Hyundai. At least until other manufacturers choose to build compact pickup trucks.

Small trucks are making a comeback

For years, finding a legitimate small truck in the United States was impossible. Brands have been producing models that are bigger and bigger, leaving compact pickups behind. With the introduction of the Santa Cruz and Ford Maverick, it looks like folks are willing to spend their money to get something that is actually practical for daily use.

If you need proof of how popular things like the Maverick are, there are some signs. The biggest one is how quickly order books for this small truck close. About a week after orders for the 2023 Ford Maverick were opened, it seemed like the Blue Oval was forced to close them. If you expect to go to a Ford dealership and buy this vehicle for sticker price, good luck with that.

For the time being, it looks like GM does not have serious plans to sell a small truck in the United States. But if brands like Toyota enter this segment, maybe that will change some minds. General Motors is a pretty popular brand when it comes to trucks. Maybe if the Chevy Montana were sold in the U.S., it would be a hit. 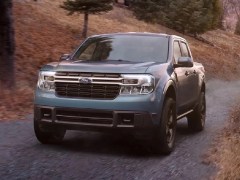 Until this automaker announces a small truck or spy shots are seen, what the exact plan is will be up in the air. But in this journalist’s opinion, the more small pickup trucks, the better.