Ford’s new Bronco isn’t a sales hit, it’s a sales home run for Ford. But with that sales success, Ford is finding that demand is much greater than supply, especially for the base Wildlands trim of the Bronco. So, at this point the company has found a clever solution to help buyers. Ford is paying buyers $2,500 to NOT buy a Wildlands Bronco.

Ford is offering a bonus for ditching options, too

For a while, the Wildtrak version has been sold out. The Wildtrak is the $52,000 high-speed off-road runner Bronco. But Ford now offers buyers $2,500 to, instead, buy one of the other trim levels. The Badlands, Big Bend and Outer Banks versions cost more. Some of the parts for the upper-level version are apparently in short supply, so Ford is offering buyers $2,500 to NOT buy options like the color-matched hard top or the Sasquatch suspension package, according to a new report from The Drive.

Though the new bonus is a shocker, Ford is doing what it can to meet demand for the hot SUV. Some owners, according to The Drive, have waited more than 900 days after ordering their Bronco to receive their new SUV. At that point, a $2,500

What is the difference between the Bronco Wildtrak and the Badlands?

Both of these versions of the Bronco get the advanced four-wheel drive as well as 17-inch wheels. They also get the G.O.A.T. modes for the suspension tuning. Either one, though, is an off-road monster.

What’s the cheapest Ford Bronco you can buy? 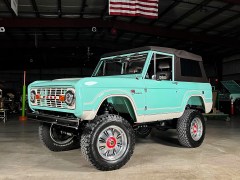 Yes, You Can Buy an Electric Vintage Bronco Like Ben Affleck’s From Gateway Bronco

The cheapest new Ford Bronco you can buy is simply the base Bronco. It starts at $32,295 and comes with the basics, like steel wheels and the 2.3-liter base engine. Sure, you can add the 2.7-liter engine and upgrade the 4×4 to a full-time system, but with those expensive options you’re adding nearly $10,000 to the base price. But even on this base version, you can remove the doors and the roof.

The most expensive Bronco is the Raptor version. It has everything you’d ever need to tackle, well, the badlands.