Movie star Ben Affleck was recently seen driving his son around in L.A. traffic in a “new” all-electric Ford Bronco. His vintage Bronco, though, had an interesting conversion from gas to all-electric drive. While most of us love the old-style Bronco, with their square bodies and round headlights, we know they’re far from efficient. Most of these old Broncos were built before emissions laws came into play so they have thirsty engines.

Gateway Bronco owner Seth Burgett told MotorBiscuit that the Bronco that Affleck was spotted driving in Los Angeles is, indeed, from his shop. It was recently delivered to Savannah Georgia by Gateway. A Bronco is a great classic SUV to convert to EV because it’s tough, so you can add several heavy batteries to it without ruining its handling, and it’s light, so it will be efficient. Affleck’s truck, he said, uses a single Danfoss motor.

“Jennifer Lopez bought the Bronco for Ben for his 50th birthday,” Burgett said. “(It) arrived the day before Ben’s birthday.”

Gateway Bronco does sell a $265,000 electric bronco like Ben Affleck’s that you can buy. Gateway calls its conversion the LUXE-GT, and it says the truck has a 300-mile range, a 4.0-second 0-60 mph time, and modern features like Apple CarPlay and heated seats. Interestingly, Gateway lets you still experience vintage driving by pairing its motor with a five-speed manual transmission. It even has four-wheel drive.

Gateway keeps the vintage aspect of the old Bronco

Gateway Bronco owner Seth Burgett told MotorBiscuit, “We focus solely on the first-generation Broncos. We build 50 to 75 units a year.”

Most EVs have a one-speed transmission. However, Burgett said that the manual transmission in his electric conversion Broncos takes the place of the torque reduction device that’s common in most EVs. Electric motors make 100% of their torque at 0 RPM, so you need a buffer like a reduction device, to prevent you from tearing all of the rubber off the tires at every stoplight.  Gateway also keeps the traditional four-wheel drive system, but pairs it with a special Atlas transfer case.

How much does a restored Bronco cost? 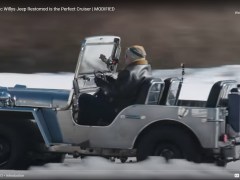 Could This be the Best All-Electric Jeep? 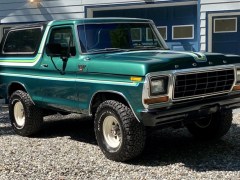 How Much Does a Vintage Ford Bronco Cost?

Gateway will also sell you a gas-powered Bronco with all of the bells and whistles. The company has three models of resto-mod Broncos, and each has a 5.0-liter Ford motor in it. The $150,000 Fuelie edition has Bilstein shocks and a special exhaust. The Coyote offers the 5.0-liter Ford Coyote engine with a tuned active exhaust and 3.5-inch Bilstein shocks. The gas-powered LUXE-GT is $300,000, however, it has a Roush supercharger mounted to a 5.0-liter Coyote engine. Each has custom paint, custom leather, and the technology you need. Though they’re expensive, each is built to order in the Gateway shop.

You can order the same Bronco that Affleck has by using the configurator at the Gateway Bronco’s website.