The Ford F-150 Lightning pickup still feels new. But that doesn’t mean that Ford doesn’t want to improve it. The all-electric truck was allnew for 2022, but it getting a small facelift in 2024 and, reportedly, a major update in 2025. What can we expect from the 2026 Ford F-150 Lightning?

When is the Ford F-150 Lightning redesign?

It’s hard to believe that we’re already talking about 2026 model year trucks. However, Ford follows an update schedule which means that its next update should come in late 2025 for 2025 models. Not much is known about the new truck, yet, it will though get divorced more from the current combustion engine version of the truck.

Autoblog reports that the new F-150 Lighting will get the new TE1 platform, which could also underpin some full-sized electric SUVs.  The TE1 platform should offer more range and battery options. Unfortunately, we don’t know much more about the redesign yet.

For the 2026 model year, the Ford F-150 Lightning upgrade should add a lot of goodies, and it will likely face some stiff competition from the new trucks from Ram and General Motors.

The Ram 1500 Revolution debuted at this year’s CES show in Las Vegas. That truck could have as much as 880 horsepower and seat seven with clever rear jump seats. It’s range is predicted to be about 500 miles and it should come with several funky features, like a split touch screen with a removable pad.

General Motors is prepping an all-out offensive in 2024 with two new EV trucks. The new Chevrolet Silverado EV and the GMC Sierra EV will both offer more than 700 horsepower, massive towing, and more.

Today, the Ford F-150 Lightning makes a healthy 580 horsepower with the extended battery pack. But, the newer trucks on the horizon mean that Ford will likely have to boost its horsepower to compete with the newer EV trucks from Ram, Chevy and GMC.

Can Ford keep up with F-150 Lightning demand today? 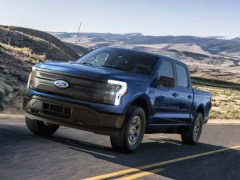 Is the Ford F-150 Lighting Pro a Better Deal Than the Lightning XLT?

It remains to be seen whether the 2026 truck, on the new TE1 platform, will allow the company to produce more F-150 Lightnings. But two things are clear: the new truck will face intense demand as well as intense competition from rivals.