We all play that little game in our heads, you know the one; if I won the lottery what truck would I buy? The choices for 2023 trucks are pretty amazing, and after writing about so many trucks, I’ve decided that there’s one that stands out. Sure, there are super-fast TRXs, cool Rivians, off-road Raptors, and even funky Honda Ridgelines to pick from. So, why did I decide that the truck I would buy is a Ford Tremor?

I thought about how I use a truck, and what I want a truck for. First of all, a truck is my daily driver for grocery runs, but it’s also play toy for weekend shenanigans, but I also use it to tow or haul motorcycles.

That means that I don’t want a luxury truck, like a killer Ram Limited or GMC Denali. Sure, the cooled seats would be nice, but very quickly they would get covered in mud or red Locktite. The Raptor and TRX seem great on paper, but have you ever tried to park an 88-inch wide truck at the local Kroger? Good luck.

The unibody pickups, too, like the Honda Ridgeline, Hyundai Santa Cruz and Ford Maverick make a great case. But for off-road camping, they don’t cut it. TRD fans are likely warming up their fingers for the comments section as I write this, but the Toyota’s seats just don’t cut it for my 5’6 frame.

The Ford F-150 Tremor takes what is basically Ford F-150 FX4 package but then pairs it with some Tremor-specific trim. That means that the Tremor comes with Ford’s powerful 3.5-liter twin-turbocharged V6 (not the 5.0 V8 for me), electronic shift 4×4 system, skid plates, and (thank you, Ford) tow hooks front and rear.

The Tremor also has optional towing packages, which help when you’re backing up. The Tremor’s monotube shocks aren’t designed to blast over desert trails like the Raptor’s but instead to provide good low-speed damping. Also, the black 18-inch wheels with Grabbers look good, too, as does the orange stripe.

But I would customize it 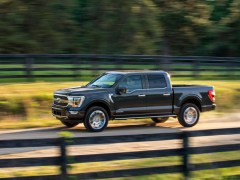 Stay Away From the Ford F-150 Hybrid, Unless You Like Horsepower

Since I’m pretending to win the lottery, here, so why not add some goodies, right? The Ford accessory catalog has a lot of Tremor-specific stuff. But, I’d add the Ford BlueCruise 1.0 with Active Park Assist because driving hands-free just seems nice.

For off-roading, I’d add the $500 Torsen front axle to maximize grip. I’d also add Pro Power Onboard to power toys in the wilderness and the handy Pro Trailer Backup Assist. I’d skip the leather seats, but the heated seats would be nice, as well as the interior work surface.