The Ford F-150 Hybrid or Powerboost truck is a bit of an anachronism. Sure, it packs a punch as the most powerful Ford F-150 you can buy today. It also has several features that big truck buyers want. But its reliability scores are in the dumps. Is it worth taking a chance on the Ford F-150 Hybrid?

Is the Ford F-150 Hybrid unreliable?

Let’s start with the Ford F-150 Hybrid bad news; for reliability, it ranks low on Consumer Reports reliability list. In fact, it ranks the lowest. Ford calls the hybrid powertrain the PowerBoost, and it’s a combination of a 3.5-liter V6 with turbochargers and a hybrid battery pack. This newish powertrain, which debuted in 2021, has had a few teething problems.

Cars.com’s review of a first-year F-150 Hybrid showed several software glitches and a some other unexpected problems in a new truck. The site TruckBed.com did a poll that could be one of the least scientific polls available, but it does give some insight. It polled F-150 Hybrid owners on social media, and the vast majority of owners didn’t make any warranty claims.

Still, most of those issues are covered under Ford’s warranty. Overall, though, at J.D. Power, owners said the F-150 (which includes every model) earns a “great” reliability score of 86 of 100. That puts the F-150 in a tie for second place. Only the GM trucks, the Silverado and Sierra, ranked higher for reliability.

Is the Ford F-150 Hybrid powerful?

The Ford F-150 Hybrid is the most powerful F-150 you can buy, well, other than the $110,000 Ford F-150 Raptor R. With 430 horsepower and a diesel-like 570 lb-ft of torque, the Hybrid certainly makes the numbers most truck buyers want. That extra power comes from a 47-horsepower electric motor. And, because of its hybrid boost, it also gets gas mileage that many truck buyers would envy: 24 mpg city and 24 mpg highway. For those keeping score, that’s a not-insignificant 20% increase over the regular Ford F-150.

Depending on whose numbers you prefer, most Ford F-150 PowerBoosts that have been tested are some of the quickest trucks you can buy, too. Most testers seem to manage 0 to 60 mph times of less than 5.5 seconds, which puts this truck in some rare company. In fact, it’s nearly as quick as the beloved Lighting trucks from the early 2000s. The power is funneled through a new 10-speed automatic. 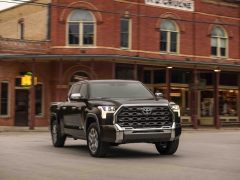 Full-Size Hybrid Trucks: Should You Pick Ford or Toyota?

But that’s only part of this truck’s capability. The PowerBoost trucks use that battery for Pro Power Onboard, which is Ford’s name for its in-bed electric outlets. The system can pump out enough electricity to power most power tools. And, the PowerBoost trucks can be ordered with a four-wheel drive system.

Though the Hybrid has a few issues, and they seem relegated to software glitches, most issues will be detected by the Ford app before they are a major problem. And, visits to a dealer for warranty service can be a pain. But, the convenience of more power and better gas mileage could be worth it.