The Infiniti Q50 comes with two impressive engine options. The first is a powerful 328 hp V6 engine mated to a seven-speed automatic transmission. Featuring rev-matching technology, the transmission manages downshifts for extra boosts of acceleration. You’ll get 20 mpg in the city and 29 mpg out on the highway when equipped with standard rear-wheel drive. If your model is equipped with all-wheel drive, it gets 19 mpg in the city and 27 mpg city out on the highway.

The second option is the 360 hp V6 engine and an electric motor. The Q50 Hybrid gets 27 to 29 mpg in the city and 30 to 36 mpg on the highway. These happen to be low fuel economy ratings for a hybrid vehicle.

2. An upscale and stylish cabin 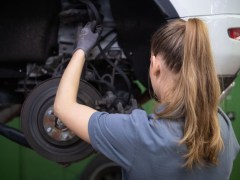 The Infiniti Q50 has high safety ratings, meaning you can feel confident and safe while driving. According to U.S. News, “The 2014 Q50 sedan earns a five-star overall crash test rating from the National Highway Traffic Safety Administration. It notched five stars in the side crash and rollover tests and four stars in the front crash test. At the Insurance Institute for Highway Safety, the Q50 received the highest rating of Good in four crash tests and a mark of Acceptable in the small overlap front test.” In addition, the Infiniti Q50 was named a 2014 IIHS Top Safety Pick.

Available safety features with these models include:

Yes, the 2014 Infiniti Q50 is a great choice for anyone looking for a used car that’s packed with luxury. With its available engine options, upscale cabin, and high safety ratings, the Infiniti Q50 should be one of your top choices. The best way to see if this sedan checks all your boxes is to take a test drive – but we don’t think you’ll be disappointed with everything it has to offer.