Have you ever seen a “Bridge Freezes Before Road” sign while out on a road trip? Do you wonder how this happens and if it affects winter driving? The truth is that the ground insulates roads from freezing air. Roads across bridges, with freezing air both above and beneath them, can ice up earlier. You should absolutely use extra caution on bridges during winter driving. But you should also know that this phenomenon is worse during certain parts of the winter.

Why do bridges ice up before roads?

Simply put, the ground insulates roads. Snow and cold air can blow across pavement for a while without forming slippery road ice. The same air may form ice on the surface of a bridge much sooner.

Dirt and pavement are not great at conducting heat. They are excellent insulators. In fact, even when the ground freezes solid in the coldest parts of the country, it only freezes for the first five feet. What this means is that it takes a relatively long time for ice to form on the surface of a road atop land.

Metal is a much better conductor of heat. This means that the heat of a road on top of a bridge quickly radiates down the bridges structure and out into cold air–according to Forbes science writer Marshall Shepherd.

Should you be careful driving across cold bridges?

Sometimes, you can see ice discolor a road surface. But sometimes clear ice—often called black ice—forms on roads and is nearly impossible to spot. It’s never a bad idea to slow down while crossing a bridge in the winter.

It’s wise to be especially cautious if you are navigating a bridge, such as a highway overpass, that takes a corner. If you drive over even a small patch of ice and lose some traction while cornering, you may slide off the road.

Finally, drivers ahead of you can compact fresh snow into ice. If possible, drive on fresh snow to maintain better traction.

In late winter, roads may be quicker to ice up

If you are driving in cold weather, before the ground freezes, you may find the roads take a long time to ice up. This is because some warmth continues radiating up into the road surface from the dirt beneath it.

If you are driving in cold weather, late in the winter and after the ground freezes, you may find the road surface ices up sooner.

What does this mean for bridges? Well, the speed with which bridges ice up in cold weather should remain relatively consistent throughout the winter. But when the regular road ices more quickly (late in the winter) it may freeze over around the same time as the bridges.

Next, learn why its important to always pack enough winter clothing to walk home or see how bridges freeze before roads for yourself in the video below: 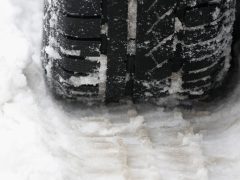 3 Tricks To Save Money On Winter Tires 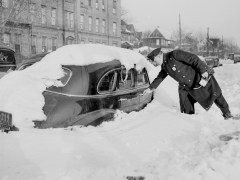 Is It Illegal To Idle Your Car To Warm It Up? 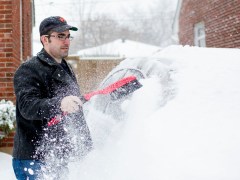