People buy SUVs for their towing and hauling and people-ferrying ability. People buy hybrids for their gas savings, and sometimes their increased performance. But rarely do these two missions interact. However, with the new 2023 Highlander, Toyota added a hybrid engine that impacts its towing ability.

How much does the Highlander Hybrid Tow?

Generally, hybrid powertrains don’t provide the power that is needed for towing large trailers simply because they’re tuned for efficiency, not power. However, the Ford Explorer Hybrid can tow 5,000 pounds.

Does the Highlander Hybrid really get 35 mpg?

The Highlander Hybrid comes with a continuously variable automatic transmission, which means it has no gears. Not everyone loves a CVT, but these types of transmissions can keep an engine revving in the sweet spot for longer than traditional geared transmissions. Kelley Blue Book, however, notes that the engine can be a bit droning. In the Highlander Hybrid’s case, the EPA estimates it gets 36 mpg in town and 35 mpg on the highway. It gets 36 mpg combined. However, if you get all-wheel drive you will pay a 1 mpg penalty.

For comparison, the gas-powered version gets 24 mpg combined.

How many people does the Highlander Hybrid seat?

The Toyota Highlander Hybrid, whether you pick the gas-powered version of it or the hybrid, can seat seven or eight people. Captains chairs or a bench are options for the middle seat. The new 2023 Toyota highlander is a large, three-row, SUV that has more room than the 4Runner, but slightly less than the bigger Pilot.

That means that first, second, and third-row passengers all get generous legroom. You can order one in seven-passenger trim with two captain’s chairs in the middle row, or with a bench that adds an extra seat.

How much is a 2023 Highlander Hybrid? 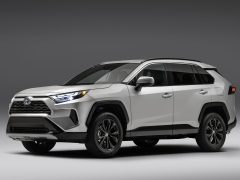 The 2023 Highlander Hybrid returns with the same specs as the 2022 version. It is, however, a premium over the base Highlander. The Hybrid uses an electric motor and a fuel-saving gas engine to produce a combined 243 horsepower and get good miles per gallon.