The Lexus brand was established in 1983 and has provided motorists with some of the most reliable luxury cars on the road. The Japanese automaker is the luxury line for the ever-popular Toyota brand, and it’s become a household name during its long existence. Everyone knows the brand name, but what does it stand for?

While brands like Toyota and Honda can be easily identified as the last names of their founders, the Lexus name is instead a product of two words. According to this Lexus of Parramatta, “the brand Lexus combines the Latin “luxus” and the French “luxe” as symbols of elegance and sumptuousness, together with the Greek lexicon meaning “lexicon” meaning language.”

Interestingly enough, many people have thought that Lexus stood for “Luxury Export to the United States.” It’s a catching and fitting definition since the first Lexus vehicle hit the market in 1989, but it’s not true.

What do the names of the Lexus vehicles stand for?

Now that you’re aware of what the brand name, Lexus, stands for, you may be wondering what the names of each model mean. After all, the various nameplates may look like alphabet soup, but there’s always a method to Lexus’ madness when it comes to creativity and engineering. As such, here are the meanings of each Lexus model:

Lexus is more than just a luxury brand 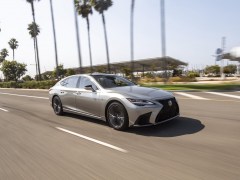 There’s a lot of design, engineering, and management that went into making the Lexus brand. Although it’s been around for a while, the Japanese automaker continues to evolve its vehicles well into the future. We can’t wait to see what the future holds for this luxury brand, considering it looks like it’s a lot more than just a name.