The Volkswagen bus is an instantly recognizable cultural icon. What if I told you that you could buy one with Subaru reliability and AWD? Now, you kind of can. Several companies are converting the capable little Subaru Sambar into a VW bus lookalike. There’s only one problem, Subaru never even sold the Sambar in the U.S., so you’ll have to import one if you want to cruise around North America.

The Subaru Sambar was a Japanese-market microvan

Subaru’s Sambar was a tiny body-on-frame minitruck and micro-bus chassis. The Japanese manufacturer built it from 1961 through 2012. A cab-over design allowed Subaru to offer this chassis with a relatively large bed or a roomy interior–for a vehicle with a 71-inch wheelbase.

Like other Japanese microvans and “Kei class” minitrucks, the Subaru Sambar began with an I2 engine, 10-inch wheels, and a manual transmission. By the end of its run, Subaru offered the Sambar with a supercharged I2, automatic transmission, and 12-inch wheels.

I’ve spent my share of time driving Kei class minitrucks, and I it’s difficult to describe just how “mini” they are. They barely have room for tow adults side by side, and ride very close to the ground. The engine would be considered small in a motorcycle here in the U.S., so shifting often isn’t optional. If you add the cabover layout, it makes sense that every bump in the road feels enormous.

It’s probably good that most Japanese-built minitrucks top out at 50 MPH. But 50 MPH in a Kei Class truck or van feels more like 100 MPH. Driving them is like no other modern vehicle, a very visceral and analog experience.

People do import Kei Class minitrucks and microbuses from Japan. Like any foreign market vehicle, you need to wait until they are 25 years old and pay an import fee, but then you may be able to register them in certain states and drive them on public roads. Registration laws vary by state.

As the number of Subaru Sambar microvans on North American roads grew, some modifiers realized the front end looks a lot like a tiny Volkswagen bus. So, enthusiasts developed kits that included some chrome trim, retro bumpers, retro hubckaps, and a Volkswagen badge. Many Sambar minibus owners also do a two-tone paint job with the iconic “V” shape on the van’s front end.

There’s a huge range of Volkswagen bus “clone” Subaru Sambars. Some simply have two-tone paint and an aftermarket badge. Others have every detail retroed-back, from chrome hubcaps to VW van-like bumpers.

Vintage Subaru Sambars are pretty cool on their own

Driving a tiny VW bus clone is pretty cool. And with the prices of first-generation VW vans going sky-high, it might be a smart option. But I have to say, vintage Subaru Sambars look pretty cool on their own–no VW bus clone kit needed.

Considering that Subaru built the first Sambar back in 1961, you can import a vintage Sambar minibus that is as old as early VW buses. Subaru even offered these early generations in a groovy two-tone paint job.

Next, learn what Subaru means in Japanese or see a retro 1970 Subaru microvan for yourself in the video below:

Ever Notice The Real Constellation in Your Subaru Logo? 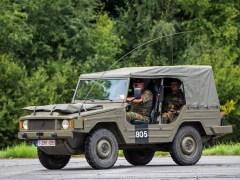