Electric vans make a lot of sense. They’re big, and built for hauling, so that means they can hold a big battery. But, the van market is a small one, at least compared to the pickup truck and SUV market. Though just five months ago Rivian announced that it wanted to build Rivian vans with Mercedes-Benz, according to a new report that partnership has ended.

Rivian Automotive seemingly came out of nowhere and dropped the new R1T truck in late 2021 and the R1S seven-seat SUV in 2022. Both vehicles immediately shot to the top of several must-have lists. They’re luxurious, fast, good-looking and capable vehicles. Van fans got excited when Rivian and Mercedes-Benz announced in late 2022 that they two would be making a van together.

However, according to a new report from Investor’s Business Daily, that partnership has ended. With the dissolution of that partnership, that means we won’t see a new Rivian van any time soon. That means no more hope of electric #vanlife for Rivian fans, for now at least.

In Europe many major cities, including London and Madrid, banned stinky and loud internal combustion vehicles from their busy city centers. Idling delivery vans don’t just waste gas and pollute, but they are just loud and annoying in these busy city centers. That’s why Mercedes launched the eSprinter Van in 2019.

Even as small vans are disappearing in the US, the eSprinter is finally coming to America. According to CNET, the new eSprinter 2.0 will be manufactured in South Carolina, which means that it should qualify for a federal tax credit in 2023. The vans that Benz sells in Europe have a short range of just 85 to 100 miles, which may be great for London, but it isn’t enough to meet the demands of U.S. buyers. The American van should have more range.

The eSprinter 2.0 should be available in consumer and fleet versions. While it will contend with Ford’s E-Transit and an upcoming electric Ram Van, that also means that Benz had no need to partner with Rivian.

Amazon is getting its Rivian vans, however 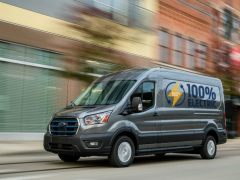 Could This New Electric delivery Van’s Hot Sales Show That EV Vans Are the Future?

Amazon commissioned Rivian to build a bespoke electric van for its drivers. The Amazon vans have some cool features that make them uniquely suited to package delivery services. In the video above YouTube reviewer Doug Demuro shows several of the features in the vans that delivered several packages this last Christmas. Amazon ordered 100,000 vans, which come in several configurations.